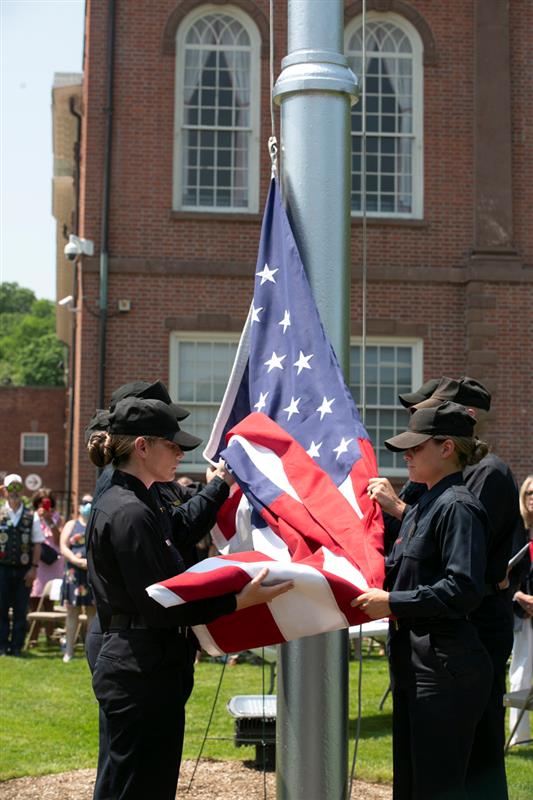 The Morris County Board of County Commissioners presented their Distinguished Military Service Medals to six veterans at the Morris County Annual Memorial Day Observance ceremony on the Morris County Courthouse lawn in Morristown, where honors also were delivered by state legislators and Congressional representatives.

Watch the Ceremony Video & Learn More About the Event and Medals

Under a blazing noon sun, the Commissioners and the veterans were joined by U.S. Rep. Thomas Malinowski, state Sen. Anthony Bucco, Assemblywoman Aura Dunn and a veteran representative from the office of U.S. Rep. Mikie Sherrill, Willy Talbo, all of whom presented honors to the veterans.  Morris County Sheriff James Gannon, County Clerk Ann Grossi, County Surrogate Heather Darling and County Administrator John Bonanni also were in attendance, along with dozens of guests, local officials and county employees.

“We are fortunate to finally gather in person to properly honor the more than 1.3 million American men and women who have given – as Lincoln termed it at Gettysburg – “the last full measure of devotion.”  If not for them, we very well might not be standing here enjoying this beautiful day with our colleagues, friends and neighbors. Their sacrifice made possible our freedoms, our values, our very existence,” said Commissioner Director Stephen Shaw.

Morris County recognizes resident veterans by presenting them with the Distinguished Military Service Medal, which are unique to the county and have been awarded since 2000 to veterans or their family members to honor their service to our country.  More than 10,000 have been presented.

Served in the U.S. Army and U.S. Army National Guard.

Served in the U.S. Coast Guard Reserve after enlisting in August 2000 and he was called to active duty on 9/11 in response to the attacks on the World Trade Center and the Pentagon.

Served as a U.S. Navy firefighter during the Vietnam War on the USS Spartanburg County (LST-1192), an amphibious combat troop carrier with 300 U.S. Marine Corps personnel.

Learn More About Each Honoree

“We do not forget our heroes in Morris County, especially those who fall in combat or during their military service.  It is traditional for us to remember at least one of them by name at our Memorial Day Observance, and because of the turmoil America suffered this past year with the COVID-19 pandemic, we thought it fitting to look back on the selflessness and heroism of Amabel Scharff Roberts an American nurse in France during World War I,” said Director Shaw.

Nurse Roberts was born in Madison in 1891 and raised there before becoming an Army Nurse in France, where she died in 1918 at the age of 26. Attending the ceremony were Margaret and Wade Merrick, who now live in Nurse Robert’s family home and keep the memory of her heroism alive. They also are friends of the family, and the nurse’s great nephew Adrian Roberts watched the ceremony via livestream.

Check out Morris County’s website and social media posts from Memorial Day Weekend for individual highlights on our honored veterans and our ceremony.