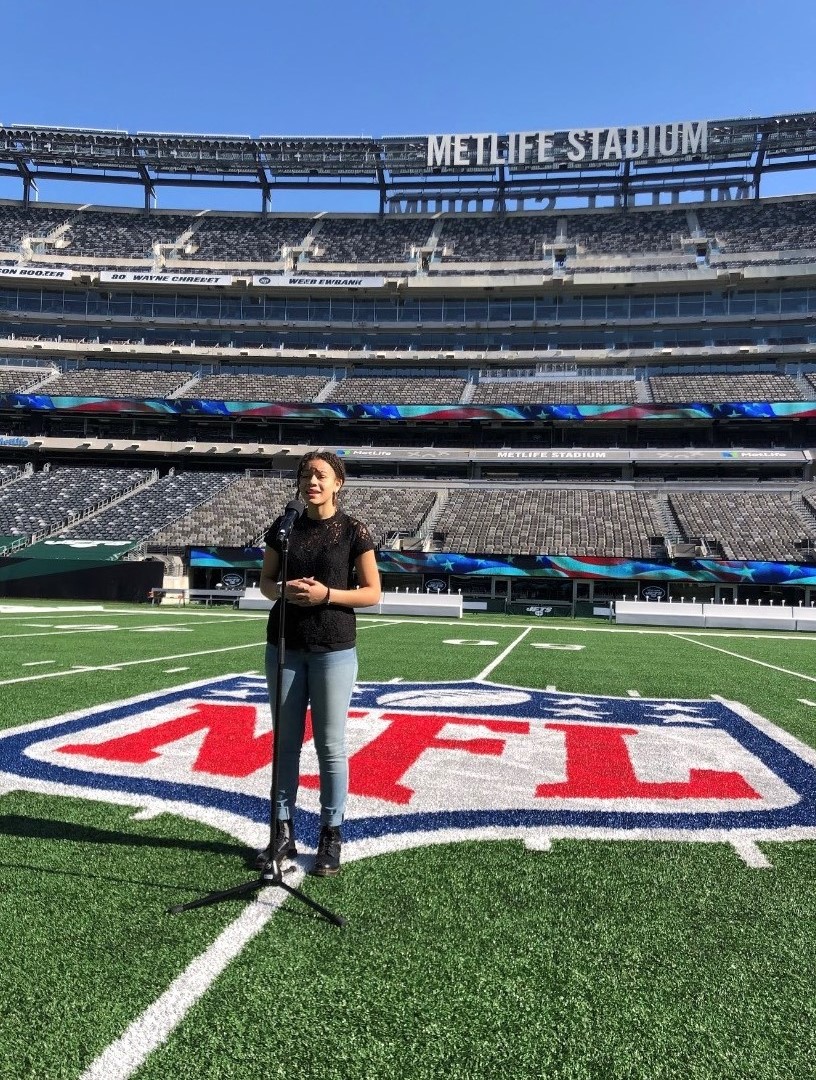 With audition registration open for
Morristown ONSTAGE, the Morris Educational Foundation (MEF), a non-profit
organization enhancing excellence in education in the Morris School
District, today announced a New York Jets ‘experience’ as part of its
prizing structure for the all virtual talent show. The New York Jets will
award its Take Flight Award to the top two vocalists, who will have the
opportunity to audition to sing the national anthem during a New York Jets
home game.

The show will feature the best amateur talent from Morristown, Morris
Township and Morris Plains as well as alumni of Morristown High School. The
top 19 and over and 18 and under vocalists as decided by the judges will
have the opportunity to audition to sing the national anthem at MetLife
Stadium in East Rutherford, with the potential of singing in front of fans
at a New York Jets home game in the 2021 season.

“We are so excited to have the New York Jets provide this additional level
of prizing,” said Melanie Smith, Morristown ONSTAGE event chair and vice
chair of the Morris Educational Foundation Board of Trustees. “Having the
ability to sing the national anthem is a considerable achievement in and of
itself, so we knew it would be a huge opportunity – and added incentive –
for our contestants. We can’t wait to see who from our highly-anticipated
talent pool will rise to the occasion to win this incredible award.”

The award was first presented during the Morristown ONSTAGE 2020 event, and
just recently, the 18 and Under Top Vocalist, Bobbi Baitey, auditioned “The
Star-Spangled Banner” on the field of MetLife Stadium. “Having the chance to
sing the national anthem at MetLife Stadium was unreal – especially when I
saw myself singing on the big screen, said Bobbi Baitey. “I am so thankful
for the amazing opportunity. It was truly an experience I will never
forget.”

As in years past, the finalists will compete for one of two 1st place $1,000
cash prizes – one for contestants ages 19 and over and one for contestants
ages 18 and under. Additionally, $500 will be awarded for the “Audience
Choice” Winner which is a “text-to-vote” at the end of the show, as well as
a $250 Rossoff Rising Star Award for talent training chosen by the
Morristown ONSTAGE Steering Committee.

In line with the all virtual event, audition video submissions will be
required in lieu of an in-person performance. Anyone interested in
auditioning must register at
www.morristownonstage.com and upload a video by January 8, 2021. The
audition fee is $35.

The theme for this year’s event is Together We Can, a belief of unity,
support and perseverance. To support Morristown ONSTAGE, Morristown Animal
Hospital has signed on as the first-ever Audition Sponsor.

A panel of distinguished arts and entertainment professionals will judge the
competition. Returning as the Master of Ceremonies and host of the show is
Morristown resident and Senior Content Producer at PEOPLE (the TV show!),
Tara Bernie, who was awarded an Emmy for her work as the Senior
Correspondent on DailyMailTV.

Morristown ONSTAGE was created to further the Morris Educational
Foundation’s ability to distribute financial and other resources to and for
the Morris School District for enrichment programs and other projects. The
2020 event raised over $175,000 for the MEF. Tickets, or access, to view
Morristown ONSTAGE will go on sale in early 2021 for the event to be
streamed in March.