Mount Olive Proud of Its Veterans 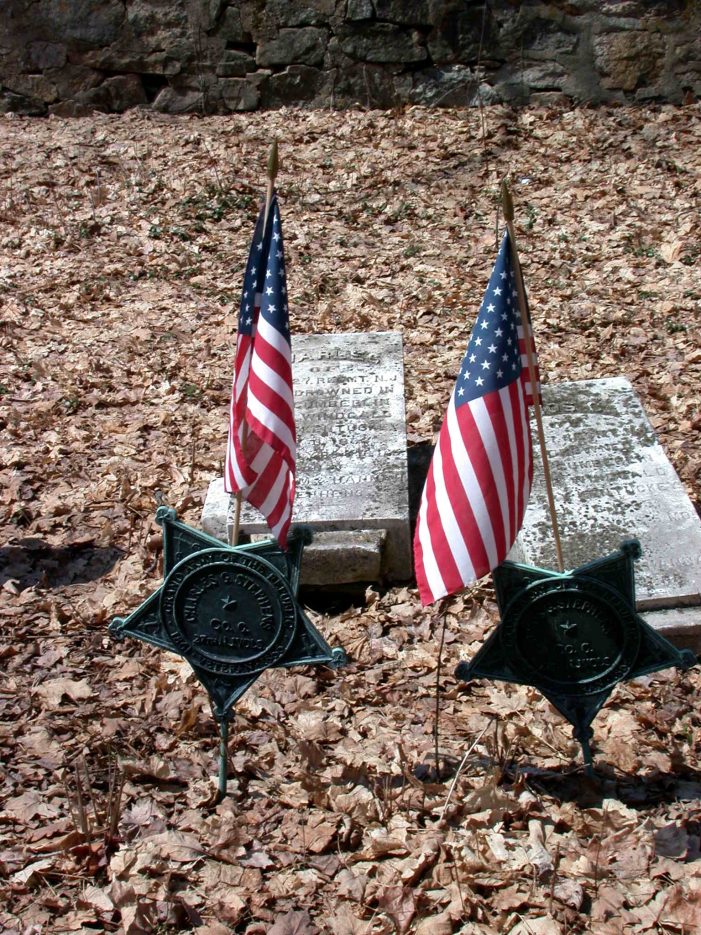 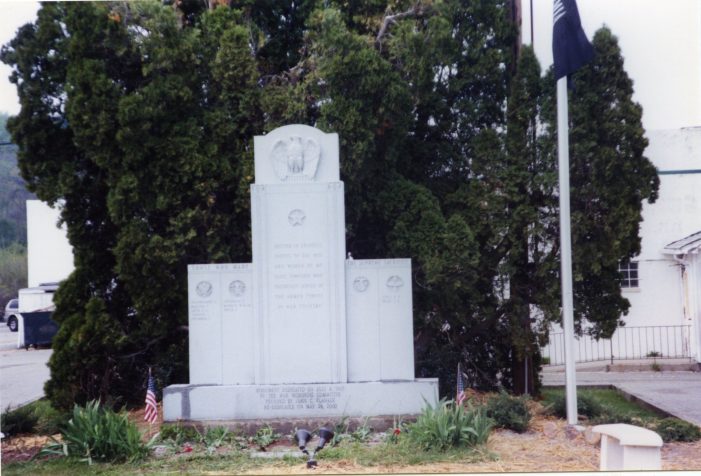 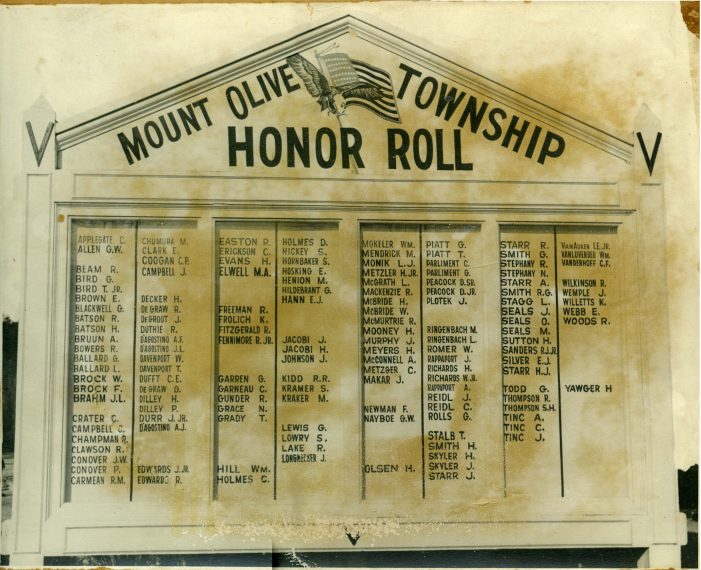 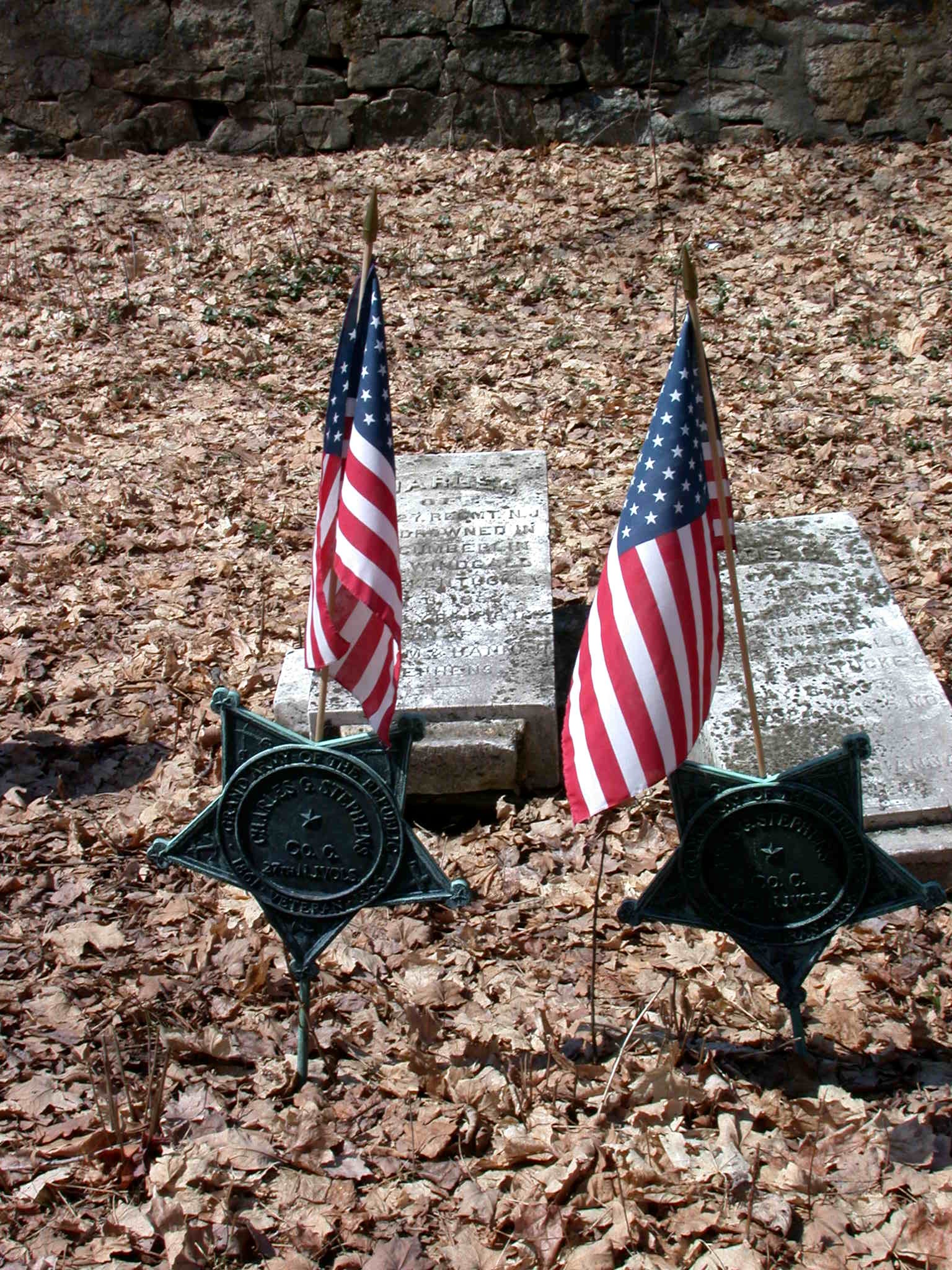 Mount Olive is proud of its war veterans.

The township always has been, and always will be.

“It was in front of the old municipal building where they put up a wooden memorial,” says Historical Society President, Thea Dunkle. “I have all the names. I tried to research some of the names, a lot of them have moved away. And those were everybody that just served.”

Dunkle speaks of the original World War II Honor Roll erected by the Budd Lake Civic Association in 1944, shortly after the end of World War II. Listed were the names of  veterans who had served in World War I and World War II. For 44 years it stood, but then started to decay.

In 1968, John C. Planker, President of the Budd Lake Civic Association, chaired a committee called the War Memorial Association, who wanted to replace it, this time listing those who had lost their lives at war. The Civic Association themselves pledged $1000 towards the project, and the group also asked for donations. Locals stepped up; dances were held as were bake sales, local scouts also got involved, and township committees supplied monument footing. The huge, granite monument was then built for $3,400. Initially listed were 12 names: one World War I veteran, seven World War II vets, and two Vietnam Veterans. The Mount Olive Township War Veterans Memorial Monument was built and then dedicated on July 4, 1968. The inscription on the monument reads, “Erected in grateful tribute to the men and women of Mount Olive who have faithfully served in the armed forces of our country.” And, above the branches of service, “Those Who Had Made The Supreme Sacrifice.”

Dunkle reflects on some of those lost. “Only one man, George Swackhammer from Flanders, ended up dying in World War I. Captain Arthur C. Brock, he served in World War I – who was actually from Canada but married someone from Mount Olive – he went back to World War II because he was an expert in submarines.” Brock died of a heart attack during World War II, the only man who served in both wars who is listed on the monument. “(Stanley Dennis) Pfrommer was born and raised here. His sister gave me a lot of information,” says Dunkle. “He was killed by friendly fire. That was kind of sad. He graduated from West Morris High School.”

Sometime later, 18 Civil War veterans were added, and the Mount Olive Township War Veterans Memorial Monument was rededicated on May 29, 2000 and was eventually moved in 2007 to Turkey Brook Park as part of the All Veterans Memorial, site which was founded by resident Charlie Uhrmann. Sperry Brothers of Dover moved the monument to the All Veterans Memorial site in November 2007, and Lt. Michael McGreevy and Spc. Ronald Ray Harrison, who died in Iraq and Afghanistan respectively, are the latest names to be added. There are now 32 names on the monument.

Not wanting to limit the memory to within park borders, the town was approached and asked, with so many new 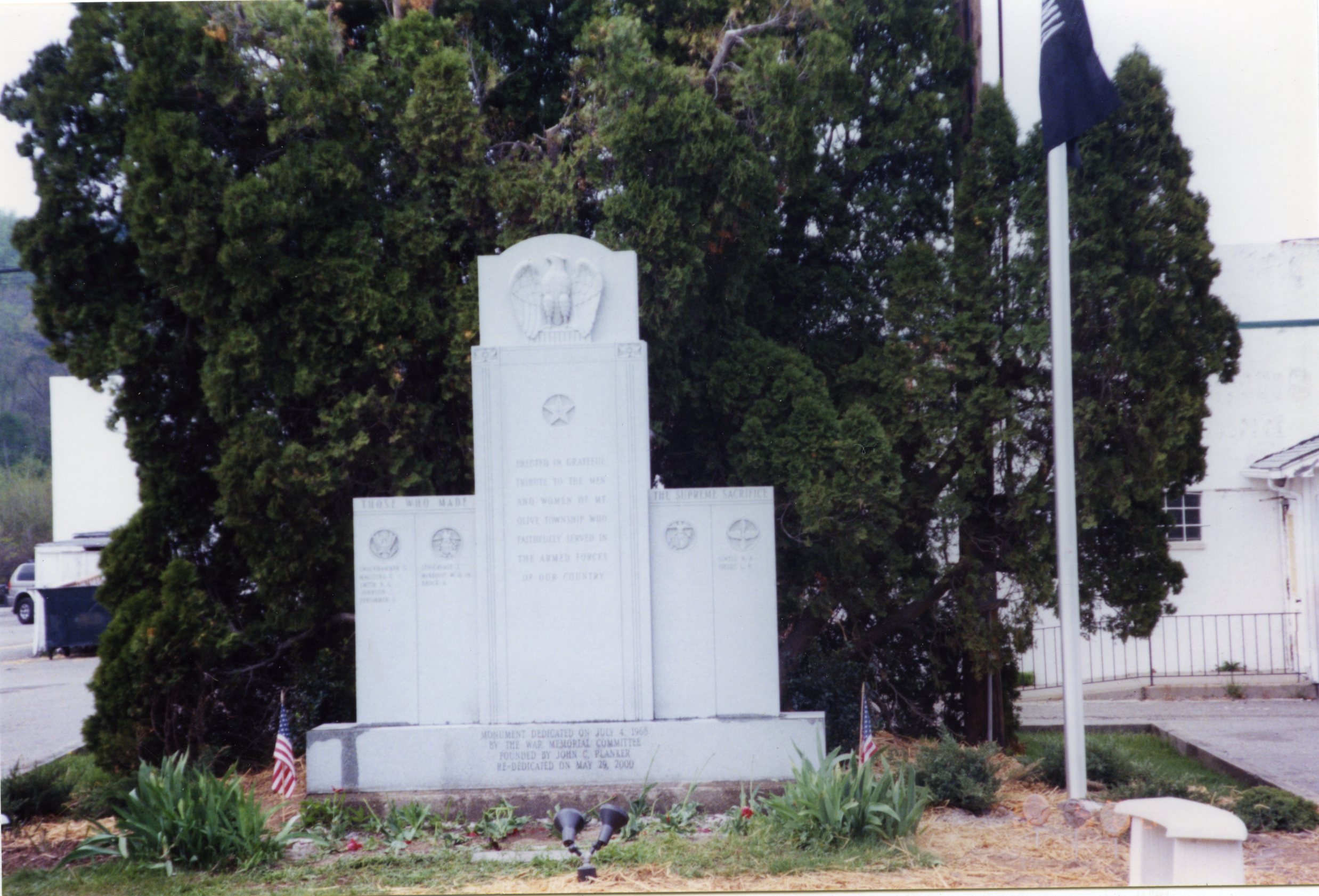 developments being built, why not name some of these streets after the veterans (on the monument)? “We had to be careful,” says Dunkle, “because we already had some street names. We already have a Johnson Avenue, we already had a Robert Street.” Everything was checked through the police department to make sure there were no duplicate names. Also, Dunkle feels that all who served deserve a flag. “I also documented in my cemetery research, and I pulled all the names of anybody that served in the military. Not everybody gets a military stone, but I do think they deserve a flag. So, I’ve given the American Legion in Mount Olive the name of the boys that are in the cemeteries that need to get a flag.”

Whether it was the original wooden World War II Honor Roll memorial which listed all those from Mount Olive who served in battle, or the current Mount Olive Township War Veterans Memorial Monument, chiseled with the names of those from the township who died in battle, or the flags which are placed next to the graves of those who fought so valiantly, there is a message:

You are not, and will never be, forgotten.