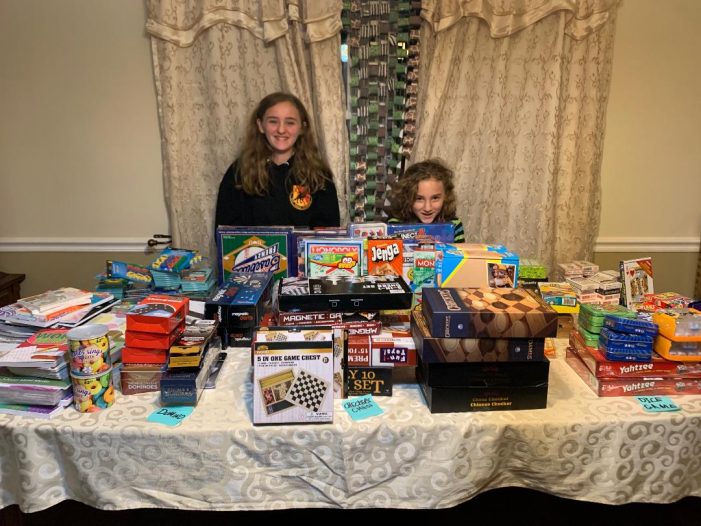 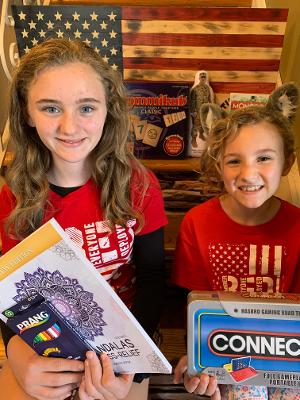 Lillyana and Jillian DiPietro’s dad, Captain James DiPietro, a member of the New Jersey Army National Guard, may be serving time overseas this holiday season, but his daughters have created something nice that will bring he and his comrades a bit closer to home.

The girls, who are in 5th and 4th grade respectively at Sandshore Elementary School in Budd Lake, created OPERATION: GAMETIME FOR TROOPS, a nifty, caring way to bring a smile to our overseas troops during the holidays. Based on their love of coloring and playing cards with their dad when he is home, the duo set out to gather new board and card games, as well as coloring books and puzzle books to be shipped and enjoyed by abroad servicemen and women.

Lillyana initially came up with the idea the second week of October. “Well, I thought, ‘Everybody’s deployed, and can’t really spend time with their families, and they should at least have fun overseas, so they can play with games, color, and stuff like that.’”

She messaged Mayor Rob Greenbaum, who called Vanessa, the girls’ mom, immediately. From there, the endeavor grew legs and ran quickly. On the Amazon Wish List page (which the girls also thought of), some of the items the young ladies suggested were a Corn Hole game, Tic Tac Toe, and much more, and they also set up a Go Fund Me page (www.gofundme.com/f/OPERATION-GAMETIME-FOR-TROOPS) with an initial goal of $500, which was surpassed late October. “A lot of people have been generous in ordering off the Amazon Wish List,” says Vanessa, “and that ships directly to us, so our dining room table is full of card games, and puzzles, and books.”

As for the total amount of items collected, Jillian says while giggling with happiness, “It’s too much to count.”

Vanessa is proud of her daughters’ efforts. “I think it’s a way for them to get involved and feel closer to dad while he is away, and they’ll be providing stuff for him, but also for the rest of his unit that’s over there.” Bins for collections were set up at Mount Olive Township Hall and Flanders Fire up until November 15, but donations are always accepted for the troops. “We have addresses all over the Middle East and overseas,” she adds.

OPERATION: GAMETIME FOR TROOPS has been an education for the sisters. “We have learned that people are very generous,” Lillyana says, “and we are really, really grateful for them.”

“I learned that it’s really nice to provide people with things that can help them spend more time with each other,” says Jillian.

“And have fun with each other,” says Lillyana, who also adds that  OPERATION: GAMETIME FOR TROOPS may not be just a one-year thing. “We will probably do this every year so they can have some fun and maybe lift their spirits up.”

And Easter is approaching, and the wheels are turning for another like idea. “We can probably send them plastic Easter eggs with stuff in it like candy,” says Jillian.

Vanessa adds, “I think it’s very important that we support our troops anyway we can.”