Music Educator Uses His Passion to Help Others 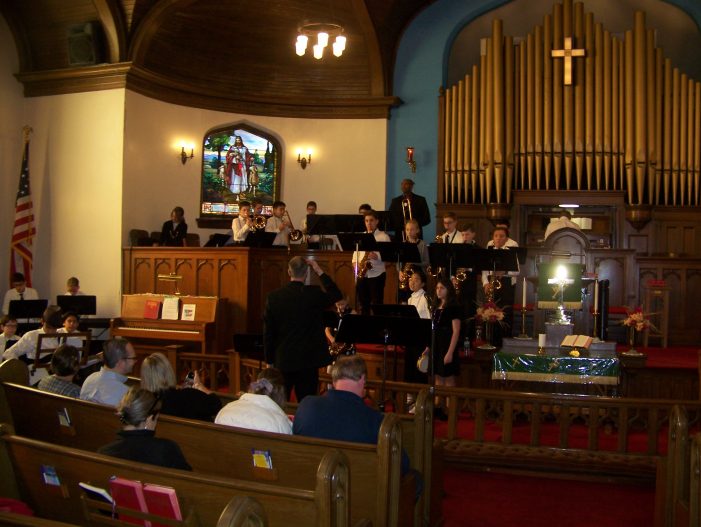 After Hurricane Sandy in 2012, Scott Lefurge, Instrumental Music Teacher at Bedminster Township School, wanted to do something to help the victims.   He got the idea to do a jazz breakfast fundraiser at his church, Stanhope United Methodist Church in Netcong. Music at that first event was provided by a jazz trio, which also played during the service that day. The success of that event, and the need of victims, has spurred Lefurge to make the jazz breakfast an annual event. The number of musicians participating has grown each year, with this year having the greatest number yet:  29. Making it an extra special moment for Lefurge was that the majority of the musicians came from Bedminster Township School. Not only did students play, but so did the school’s principal. This year’s event, held in February, raised $730 (which brings the total raised since the beginning to $3,730). Recently, Lefurge reflected on the event, how it started and how it has grown.

“In January of 2013, I thought if we could combine a jazz worship service with a traditional Fat Tuesday pancake event, we could raise funds to help provide money for Hurricane Relief efforts. We thought if we held this event on the Sunday morning before Ash Wednesday, instead of on the Tuesday evening [before it], we would have better attendance and better fundraising efforts. I thought since we were holding the event around Fat Tuesday, we should incorporate a Mardi Gras theme. [Mardi Gras is held on Fat Tuesday.] That also sparked the idea of including jazz music, since many people, including myself, think of New Orleans and jazz music in association with Mardi Gras,” shared Lefurge.  The event was, and continues to be, held at the Netcong church and is sponsored by the church’s United Methodist Men’s group.

The food for the breakfast is donated, so 100% of the funds raised go directly to the United Methodist Committee on Relief organization which helps in relief efforts worldwide.

Lefurge noted that the enthusiasm for, and success of, the event, combined with the continued relief need, have contributed to it being an annual event.  He shared “Years after Hurricane Sandy happened, there were still families displaced, houses not repaired, and relief efforts still underway.”

This year saw the largest number of musicians ever assembled. While the event started eight years ago with a trio, last year it had grown to 16 musicians.  This year, there were 29. The musicians included Lefurge; the church pianist/organist Angelo Benincasa; Lefurge’s son, Zach, Cory Swan, the principal of Bedminster Township School; Swan’s son and another 10th grade student, with the rest of the musicians being Lefurge’s students from grades 4 – 8.

Swan has played the trombone since fourth grade, was a major in music education in college and was an Instrumental Music Teacher before moving into school administration. He shared, “Mr. Lefurge knows my musical background and often keeps me very active in anything involving our students that is related to music. He extended the invitation for me to play and for my 15-year-old son Quincy to sing, since he has a musical background as well.”

For Lefurge, it was a special time, “It’s been a joy to encourage my Bedminster Township School Jazz band musicians and their families to join us for this event.  What an amazing blessing it was to have such a positive overwhelming response.”

Swan shared how much he enjoyed it as well, “The event was fun and memorable for me because it is not often that a principal of a school gets to perform with one of his teachers, his students, and his own son. The fact that money was being raised for a good cause was also extremely important to me. I am extremely grateful to Mr. Lefurge for inviting Quincy and I to this event. I am glad that we were able to participate.”

The event has become a tradition which grows year after year, what drives Lefurge to keep doing it?

Lefurge said, “There will always be a need for charity funding for disaster relief efforts. God has blessed me with the musical talent to play and teach jazz music. If I can use my talent as a way to give back or pay it forward for those in need, why shouldn’t I?  I feel that God is calling me to use my talents in this way to reach others and help others through music.”