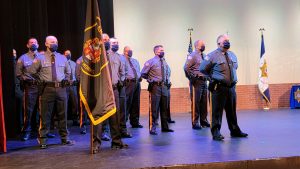 The Morris County Park Police were absorbed by the Sheriff’s Office, effective Jan. 1, 2022, in a move that will keep the 24 park officers on staff and enable an increase in overall park patrols, while addressing insurance coverage issues that arose earlier in the year. The newly sworn officers will become part of a newly formed Patrol Division within the Sheriff’s Office, with Chief Warrant OfficerJack Ambrose serving as chief of the unit.

“This is a historic moment. Today, we join two outstanding law enforcement agencies to create a new, highly trained Patrol Division within my office that will enhance the protection of not only our unique, one-of-a-kind park system, but also all of our county facilities and the Morris County community in general. Under the tutelage of Jack Ambrose, a seasoned, law enforcement veteran who was sworn in as Chief of the new division today, the people of Morris County can expect nothing short of the finest service from this professional team of officers,” said Sheriff Gannon.

The special ceremony was held in the Dragonetti Auditorium at the Student Center at County College of Morris (CCM) in Randolph.

“This ceremony culminates a necessary and prudent consolidation of law enforcement resources that will enhance the safety and enjoyment of our Morris County park system for more than four million people who visit it each year. With more than 20,000 acres of parkland and 39 facilities ranging from golf courses to historic sites, this is the largest county park system in New Jersey and an important community asset that we need to properly protect,” said Commissioner Director Shaw.

The decision to merge the state’s last remaining county Park Police department into the Sheriff’s Office was prompted by concerns over insurance coverage for the park officers. It brings the Park Police in line with insurance coverage afforded all other officers in law enforcement agencies throughout New Jersey, particularly in terms of coverage should any legal actions arise in regards to an officer’s performance of his or her duties.

“I worked with Jack for over 25 years and I have never met such a loyal, natural leader. He is dedicated and motivated, and he will excel in leading this new Patrol Division within the Sheriff’s Office. I can think of no one better suited for this position,” said East Hanover Police Chief Christopher F. Cannizzo.

Ambrose joined the Sheriff’s Office in May 2020 after retiring in November 2019 as a Captain for the East Hanover Police Department following 33 years with the department.  For 25 of those years he helped to train generations of police officers in Morris County and beyond as the lead Drill Instructor and a Physical Training Instructor at the Morris County Public Safety Training Academy

The 20,000-plus acres of parkland and 39 facilities making up the park system also includes outdoor educational and recreational facilities, arboreta, conservation areas, more than 253 miles of trails and an ice skating arena. Park activities operate year-round, requiring police presence to ensure the safety of visitors and park employees alike.

At the ceremony, officers officially retired the flag and patch of the Morris County Park Police, and those items will be preserved with county historical artifacts.