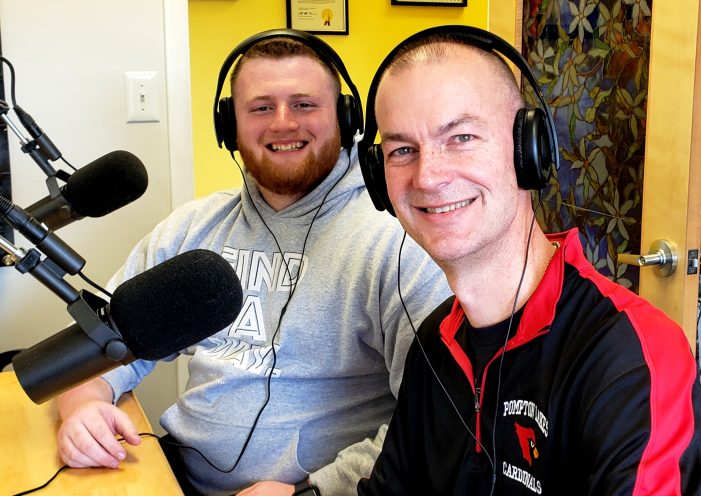 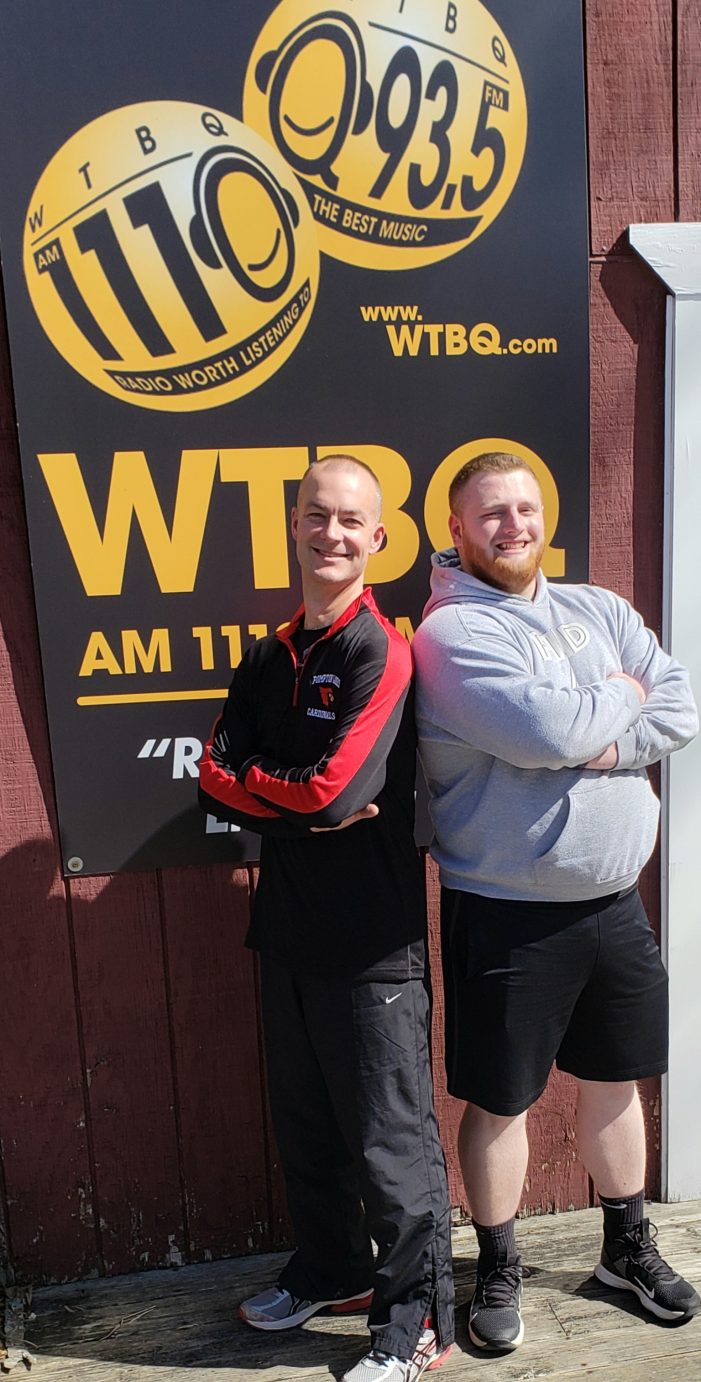 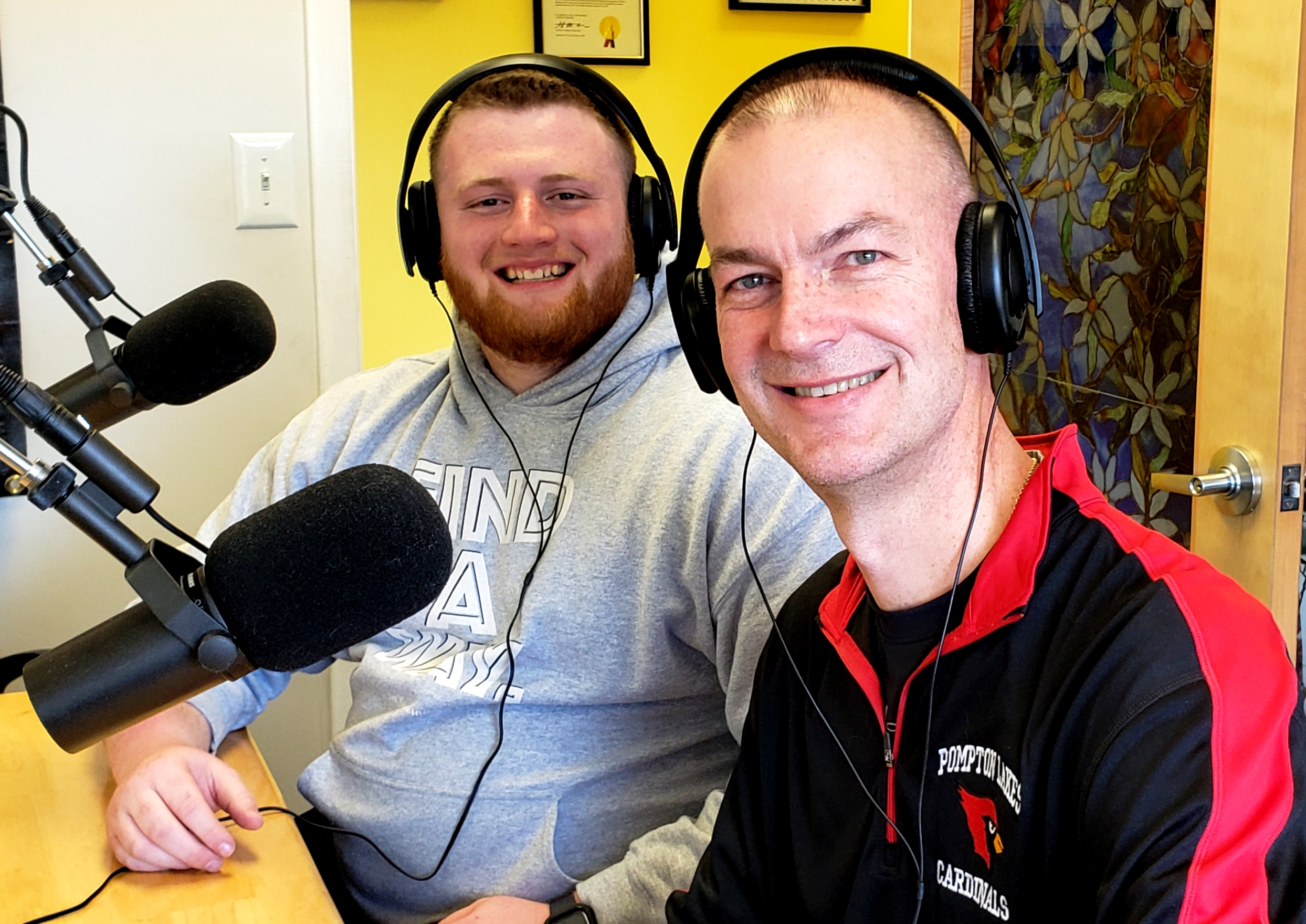 It’s about sports – locally and nationally – and it’s about high-spirited banter and humor.

Most of all, it’s about friendship.

Every Saturday from 12:15 p.m. – 2 p.m. former Pompton Lakes High School football and basketball player, Ryan (Goose) Gosiker and current PLHS Principal of 16 years, Vince (Doc) Przybylinski get into some heavy sports talk on the Goose and Doc Show on WTBQ AM 1110 / FM 93.5, and WGHT AM 1500 / FM 98.3. Live streaming is available at www.wtbq.com for those outside the listening audience area.

However, there is also the fun side, and you can tell both value each other as they trade barbs as well as team and player statistics and stories. And here’s a guarantee: even if you are not a sports fan, this duo might convert you. If not, they’re great company during your early Saturday afternoon.

Gosiker, who also went to Wesleyan University and played football, is doing something that he loves. “I say every day ’I get to do a Super Bowl every week.’ I think we can go back to the first week in December. It kind of was sprung upon me…that demo tape that we were putting together, our bosses Frank (Truatt) and Taylor (Sterling) said, ‘Put it on.’ And we put it on, and the show’s been great ever since.” Gosiker’s goal was always to host his own show, but “it’s hard to do by yourself. The Doc and I have stayed close since I graduated high school in 2016 – I can’t believe it’s going to be five years this June – but we stayed close. I reached out to him.”

“Ryan came in and we sat in a conference room,” Przybylinski recalls, “and we were just talking about his career aspirations. As Ryan alluded to, we’ve been close really ever since I met him when he was in eighth grade, and I just said, ‘Look, if I was to do a show, I’d want to do it with you.’ And he said the same thing back to me.” Przybylinski also remembers Gosiker making a good point during the meeting. “He said, ‘You can’t sit there doing a show by yourself, and just laugh at yourself; you need someone to laugh with.’ And that’s what we’ve done. And for me, it’s an outlet from the rigors of the everyday job which I absolutely love. Born out of that was the relationship with Frank and Taylor of WTBQ and WGHT, which meshed with the relationship I have with Ryan, and born out of that is a show that’s a great outlet for me, and a great opportunity to continue to support a student I love in hopes that he reaches his ultimate goal.’”

The Goose and Doc Show hosts would like to expand. “In terms of on air,” Gosiker says, “I would say we want to get more callers; we want more people calling in. Doc talked about an idea with me a couple weeks ago about getting specific people to set up a phone call, and maybe they’re giving us a report – maybe they’re our Jets guy, or our Mets guy, or our Nets guy, and they’re giving us a report on their team – to get the fans more involved. We’d do it for our listeners; we just love having them be a part of the show as much as we are.” The duo would also like to get players into the studio. “We’ll learn a lot about them and their human side. We know what a lot of guys do can athletically, and we can find stats anywhere. But to see them in a human lens and have them laugh with us and just have some fun with us, blow off some steam, that I think is an obvious expansion for us moving forward.”

Again, it’s a friendship. “I think you know the metaphor you hear with quarterbacks or pitchers: pretend like you’re throwing to your best friend or somebody that you’re close with,” says Gosiker. “That’s what this show is all about. I’m sitting across from a guy I know I can always trust. We’ve come so far in such a little time, we’re excited to continue to build this, and were never going to be satisfied.”

“We treat every show like a gift,” adds Przybylinski . “I will listen to what he has to say, but he’ll continue to maybe value some of the wisdom that I might offer as someone who’s 30 years older than him. And that’s why it’s worked.”