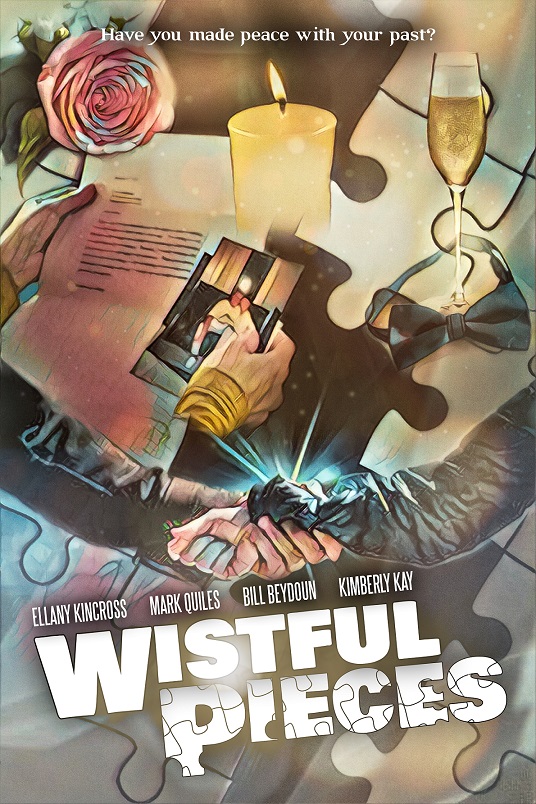 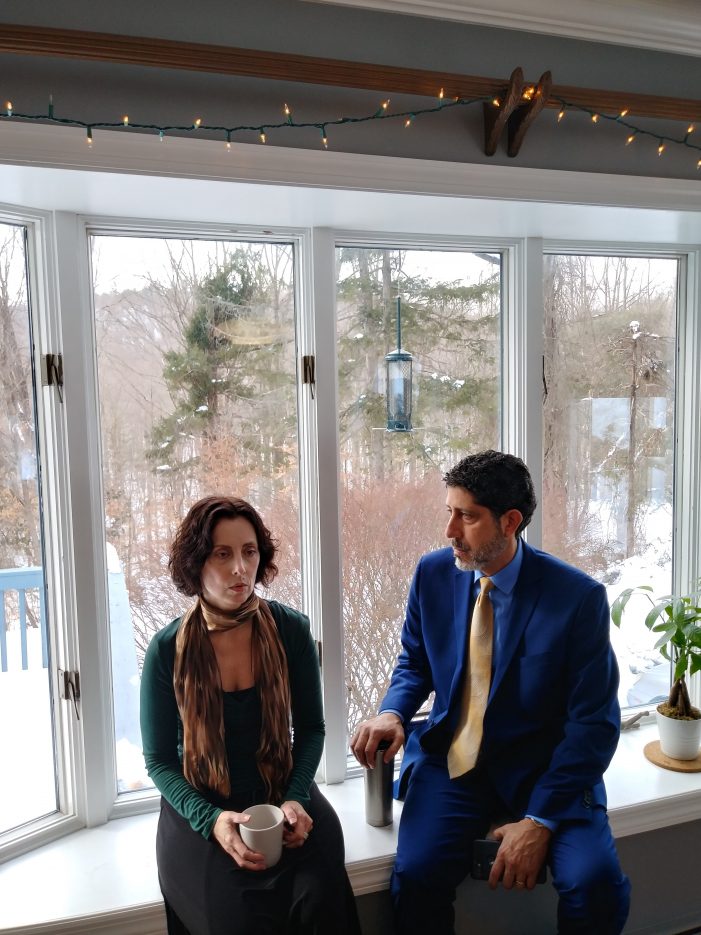 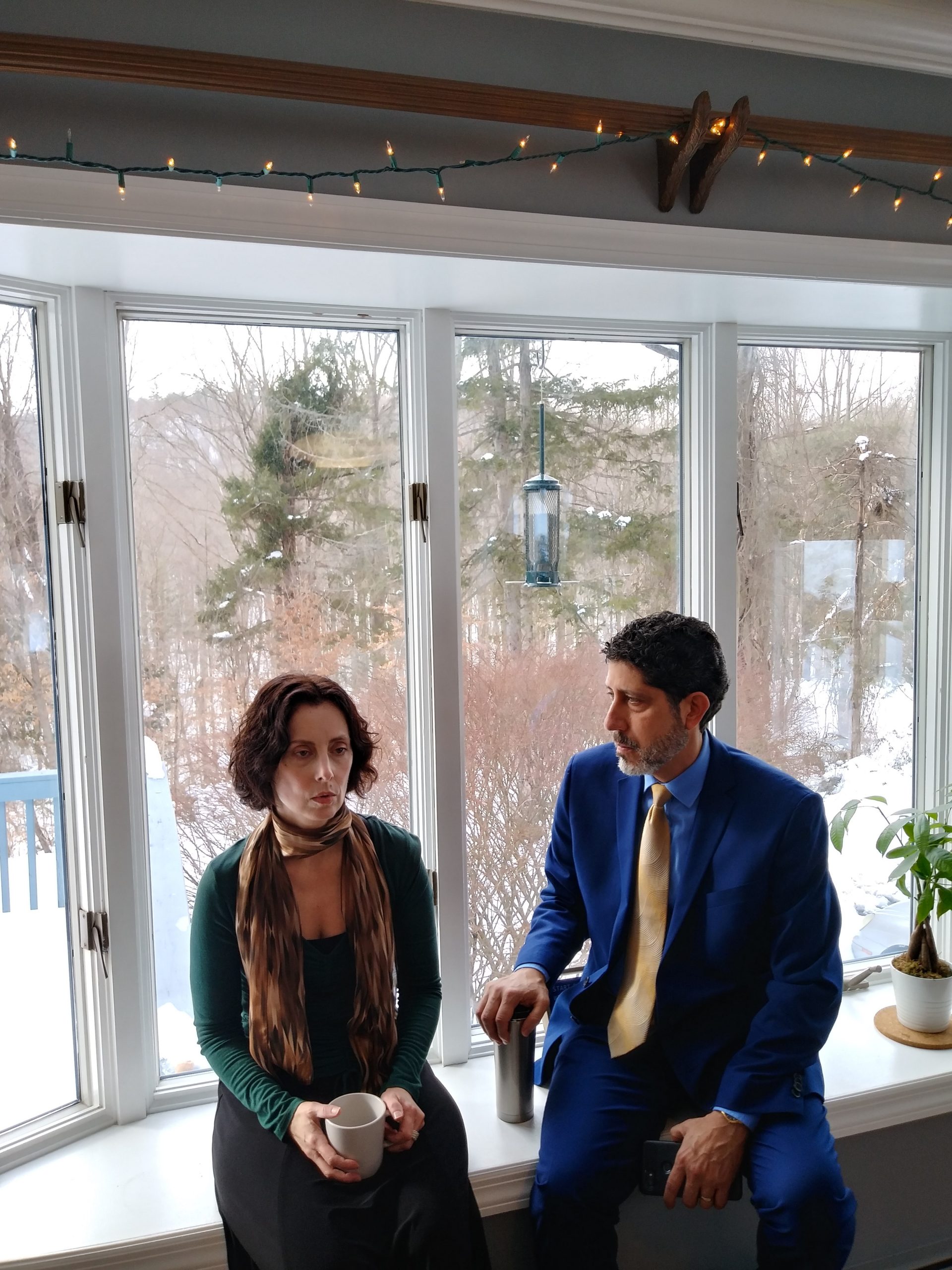 It’s a story of forgiveness and how the world you see isn’t really all there is. Ellany Kincross recently wrapped her new short film, ‘Wistful Pieces,’ taking a page out of the writer/director’s own life, letting go of an ex-boyfriend and moving on from her own personal pain.

“It was cathartic because the piece really forced me to think a lot about him and the relationship. Earlier drafts of the script I was writing from his perspective and was going to go into production and film it that way. There was something nagging at me and I really need to tell it from my perspective,” Kincross says, adding she did exactly that, ripping the whole thing apart and rewriting it from the girlfriend (wife’s) perspective.

Looking back at their union, the actress says they were young and he was a troubled guy.

“Everybody has issues and I think probably any of the previous hurt I had had about the situation, I feel at peace about it now,” she says.  “I don’t think he’s a bad person.”

We’re introduced to Nick and Nadia, a successful New Jersey couple in their 40s married for 12 years. Their lives revolved around love and career until Nadia’s ex-boyfriend, Adam enters the picture.  Adam is desperate to make peace with the past. As he thrusts himself into their lives, Nick and Nadia’s commitment is tested by otherworldly forces.

It starts with Nadia receiving an unexpected letter from Adam (her high school prom date), where he indicates that he had a very bad car accident and wants to meet up with her to try to regain lost memories.

“This is obviously somebody she has not thought about in many, many years,” says the writer/director, who also acted in the film. “She decides not to get together and help him, sends him an email and (thinks) that’s the end of that. He shows up at her house a few days later appealing to her for assistance.  When she’s reluctant, he grabs her arm in desperation.”

According to Kincross, the husband comes walking up and you kind of think this is a stalker piece — it isn’t. Nick tells him, ‘you need to leave’ and he unwillingly leaves. Then the wife starts to have some symptoms.

She’s fainting, can’t eat, can’t sleep and turns out when Adam confronted them in the driveway he was actually a ghost.

He sent that letter before he passed and because he wasn’t able to resolve the painful breakup they had before his untimely death — he came to her as a ghost, attaching his energy to her upon touching.

“She continues to get worse and they end up going to a medium to resolve the issue. The medium helps wrap up the story,” the writer/director says, noting you find out that when Nadia and Adam broke up years earlier, he asked to get back together and she gave him a second chance.

What she didn’t realize was that they were not exclusive, according to the writer.

“He was dating her and someone else at the same time, and he got this other woman pregnant,” says Kincross. “She was very hurt and offended and said, ‘it’s your problem to deal with, don’t bother me again’ and he never did.

“It’s helped me heal from the process and I’ve gone back and forth about it so many times — when he contacted me five/six years later was he still trying to make amends for what happened previously or did he really did have something happen to him. Was it just an excuse; I’ll never really know.”

The actress used that as the inciting event but fast forwarded to a couple now in their 40s, then added the 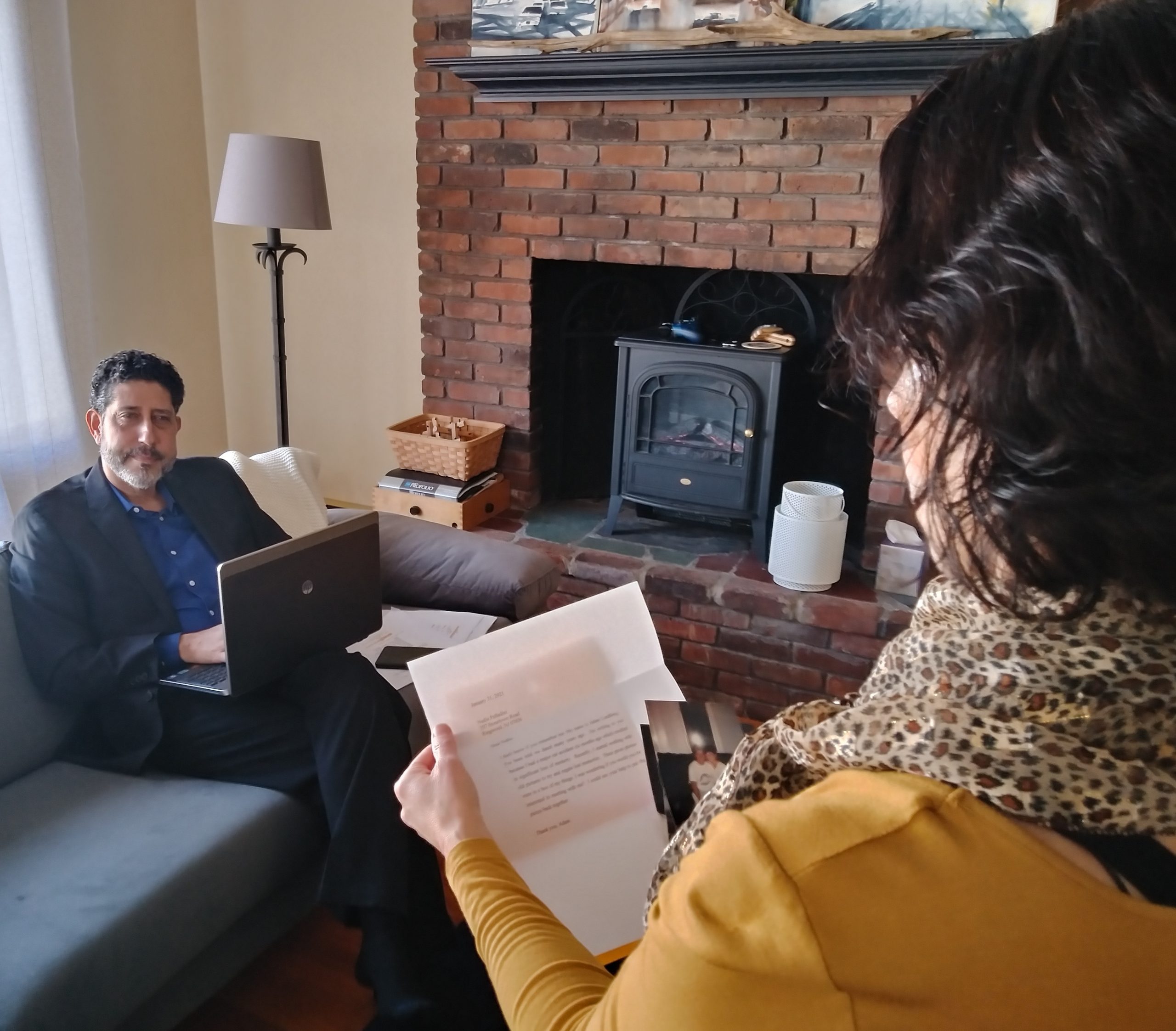 supernatural element because she felt it would be more effective storytelling.

“Neither one of them was very interested in anything new agey or woo-woo or supernatural prior to this,” she says. “It opens them up to the possibility of a new perception of the world.”

In the session with the medium Nadia is asked to forgive Adam for what happened in the past and release him, to allow a sense of closure so that his spirit can move on and she can too.

“Of course, she’s reluctant to do so because it’s about opening up a wound that she hasn’t given any focus or attention to in a very long time,” the writer says, adding that they had a fitting poster made for the film, with the tagline ‘Have you made peace with your past.’

Things happen to us in life, and you can’t just shove them somewhere and think it’s taken care of; it’s not, according to Kincross.

“So it’s an opportunity not only for the ex-boyfriend to have healing and closure, but for her because she never really made peace with herself,” says the writer/director.

With all of Hollywood shut down for months and actors of stage and screen out of work, the process of making a film during COVID has been challenging.

As a member of the Screen Actors Guild, in order to make a film with Guild actors Kincross  needed to be in compliance with the standards they set forth.

“They had a very specific, regimented way we could even conduct a shoot,” she says. “Everybody had to get COVID tests in advance and when we got to set, the crew had to maintain masks all the time, except (during) lunch break. The actors kept their masks on all through rehearsals and set and lights. The minute we were ready to do a take, masks came off; as soon as we were done or cut, masks went back on.”

Kincross says there are so many actors dying to work right now.

“I had actors on top shows: ‘Bull,’ ‘Law n Order’ or any of the New York shows submit, and were like ‘I wanna play your husband’ in this’ or ‘I wanna play the ex-boyfriend.’ I don’t think we would have had the same kind of response to the casting if COVID wasn’t happening,” says the writer. “They want to keep using the acting muscles. It’s a supernatural story so there was an appeal to that based on the fact that everyone’s looking for escapism right now.”

When she did her initial search for a director of photography and sound and lighting person; she said it was alarming that some people weren’t interested in getting COVID tests or being on set wearing a mask.

“I was like, I’m sorry, I can’t bring you into my production,” Kincross says, adding that of her film’s eventual cast and crew — everybody followed the rules.

“You find the people that are willing to be compliant (because) people want to work,” says the writer/director.  “Some of these people hadn’t been on set in six months, nine months.  So to be shooting something, they were thrilled.”

Kincross felt the piece could be universal in theme since we all have people in our past that we need to make peace with.

“It could be a parent, an ex-lover, a spouse that you’re no longer with,” she says. “It’s about seeing this couple have their lives blown up a little (and) this woman finally decides to forgive this guy.”

Whether it’s theater or film, she says for the person watching — something within you shifts.

So remember that the ex-boyfriend was a human being; maybe he wasn’t perfect, maybe his choices weren’t great but he’s dead and moved on and wanted closure before he passed.

With that realization maybe she should just let go of the anger or the fear she had toward that person, according to Kincross.

“What happens to this couple is their eyes are opened and altered,” says the actress. “Another takeaway is the uncertainty of life. Nick and Nadia are going along, living their lives, then the past steps in to ‘rock the boat.’  Yes, it’s unexpected and unwelcome, but the past serves as a catalyst to help Nadia heal herself, be a better person in her relationship to Nick and also be a better human being.”

That’s what we all strive for.

“Being better than we are,” Kincross says. “I’d love to think that after all is said and done that maybe Nadia has learned to be a more forgiving person because of what she’s experienced.”