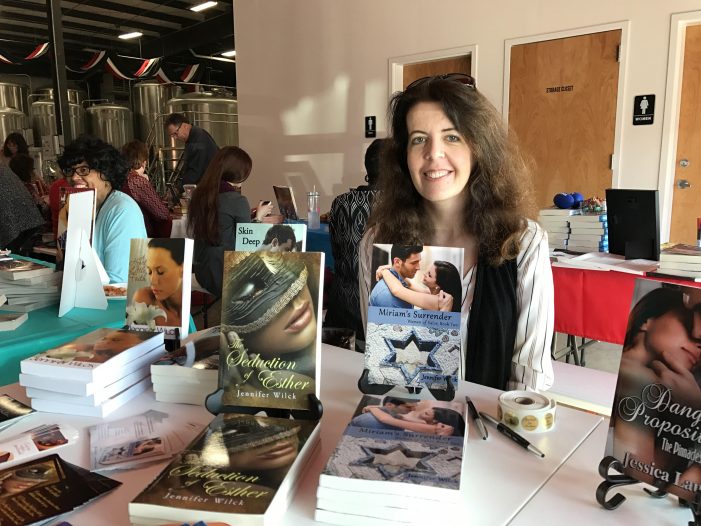 Looking for a great romance to read with Valentine’s Day approaching? Check out a best book award finalist, “A Heart of Little Faith,” by Randolph author Jennifer Wilck.

Wilck received a nice surprise before the holidays that the first book she had ever written was selected for a best book award for fiction romance.  “A Heart of Little Faith,” has been named an award-winning Finalist in the “Fiction: Romance” category of the 2016 Best Book Awards. i310 Media Group sponsored the awards and announced winners and finalists on Nov. 17, 2016.

Excited by the news, Wilck’s passion for writing has boosted her to continue to create characters and story lines with three more books in the works.

“I was very surprised,” says Wilck, 46, of Randolph. “It was very nice to get reassurance; it’s a good thing. Writing is a very solitary pursuit. It’s nice to hear from someone I don’t know, that they thought this was of some value.”

With four books already published, Wilck selected two of her works to submit for the best book award. The other title she entered was her second book, “Skin Deep.”

“They didn’t tell me why” the first book was selected, Wilck says, but admits “It was nice to see that everything I submitted didn’t get chosen.”

More than 400 winners and finalists were announced in more than 100 categories. Awards were presented for titles published in 2014-2016.

Jeffrey Keen, president and CEO of i310 Media Group said this year’s contest yielded more than 2,000 entries from mainstream and independent publishers, which were then narrowed down to more than  400 winners and finalists.

Keen says of the awards, now in its 13th year, “The 2016 results represent a phenomenal mix of books from a wide array of publishers throughout the United States,” such as Simon & Schuster, HarperCollins, Penguin Random House, McGraw Hill and hundreds of independent houses.

“A Heart of Little Faith” is a contemporary romance first published in 2011 by Whiskey Creek Press. A second edition came out in 2014 with Rebel Ink Press, an independent company that gave her work a boost by providing more “rigorous editing,” more hands on and marketing as well as a cover, she says.

Wilck began writing “A Heart of Little Faith,” in 2006, but it took three years to complete and find a publisher as her first priority was her two little daughters.

“I would write an hour a night when they went to bed,” says Wilck, a graduate of Washington University in St. Louis, with a double major in English literature and French. After starting out in public relations, then writing technology articles, Wilck switched to a full-time novelist.

She shares her first book’s synopsis.

“With a wheelchair instead of a white horse, and a vow against falling in love again as his armor, Gideon Stone is the last person Lily expects to sweep her off her feet. But when a business agreement forces the two of them together, that is exactly what happens. Now all she has to do is convince him that the biggest obstacle in their path exists in his mind, not his body.”

Wilck says “it was my first book. The character Gideon popped into my heart. I was watching TV; there was some passing person who just caught my eye. I wanted to take that character and do something with him.

“I really loved these two characters. I like their story and I like their interaction. Because it was my first one it does hold a special place in my heart but it’s a story I do like.”

This book is different as “the hero’s in a wheelchair; you don’t often have that. It’s a great story between people who’ve been burred before. People are looking for hope. It’s a story that makes you feel good.”

Wilck says, “it has to have a happily ever after, or a happy for now. Real life doesn’t always have that. It makes people feel good. I love creating characters and tormenting them and coming up with a way for them to live happily ever after; putting obstacles in front of them that they have to overcome.

“I like to come up with the perfect response and make things turn out the way I like them to and have some control over that.”

Wilck has four titles published and is currently working on three more.

“I write every day,” says Wilck. “I try to set a goal for 1,000 words or four to five pages a day.” She also prefers short chapters and keeps her books to about 300 pages. “I just keep writing; I finish one and move onto the next one. I have a character in mind then create a story around the character.”

Wilck recommends her books to those who like to read contemporary romance fiction, which means “current day” as well as stories that are not graphic.

“Romance has a variety of different levels; this one is not very explicit. I don’t put in a sex scene if it doesn’t need a sex scene. It has to go with the storyline.”

All of Wilck’s books are published by Rebel Ink Press and are available through Amazon, Barnes & Noble and AllRomanceEbooks.

She can be reached at www.jenniferwilck.com.