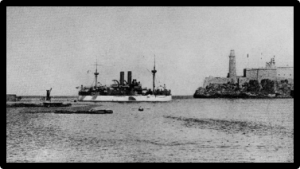 The Feb. 15, 1898 explosion that sank the U.S.S. Maine in Havana Harbor, Cuba killed 268 of its crew and sparked hostilities between Spain and the United States, which had long supported revolts in Cuba and the Philippines to break from Spanish rule.

“Remember the Maine” became a call to arms in the Spanish-American War, and Morris County residents were among the heroes and casualties of a series of conflicts that began in Cuba and continued into the Philippines years later.  Morris County’s Office of Planning and Preservation has compiled a growing list of those soldiers and sailors, and hopes to fill in many blanks on their history, as well as find others who served.

“This release demonstrates Morris County’s continuing efforts to document her veterans’ histories. What may only be a name of a veteran today, in the future someone may be able to fill in that history,” said Jan William, a historian at Planning and Preservation. “We have compiled many names and even some old news clippings on our local sailors and soldiers who served in those conflicts, but we would love to learn of others and find any supportive documents as well as old news clippings about them. This was a notable and interesting era in our nation, as well as in Morris County, and we hope to document it as thoroughly as possible. We invite everyone to help us.”

Contributions may be sent to jwilliams@co.morris.nj.us.

It was on April 21, 1898, the United States declared war on Spain, marking the first military conflict wholly fought overseas by our nation. Quick victories by U.S. troops led Ambassador John Hay, who soon became Secretary of State, to dub the conflict, “A splendid little war.”

By Dec. 10, 1898, an armistice was signed that freed Cuba from Spain and left dominion of Puerto Rico, Guam and the Philippines to the United States, triggering a second conflict known as The Philippine-American War. From February 1899 into 1902, American soldiers fought to suppress many of the same Filipino insurgents who had been revolting against Spain, losing far more troops in those battles than in its conflict with Spain.