Remembering a Great Team, a Great Man and Coach, and “the Helmet” 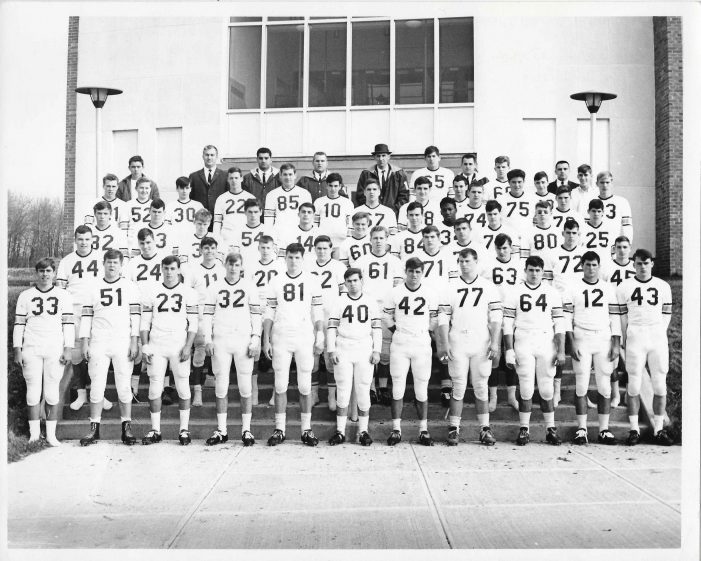 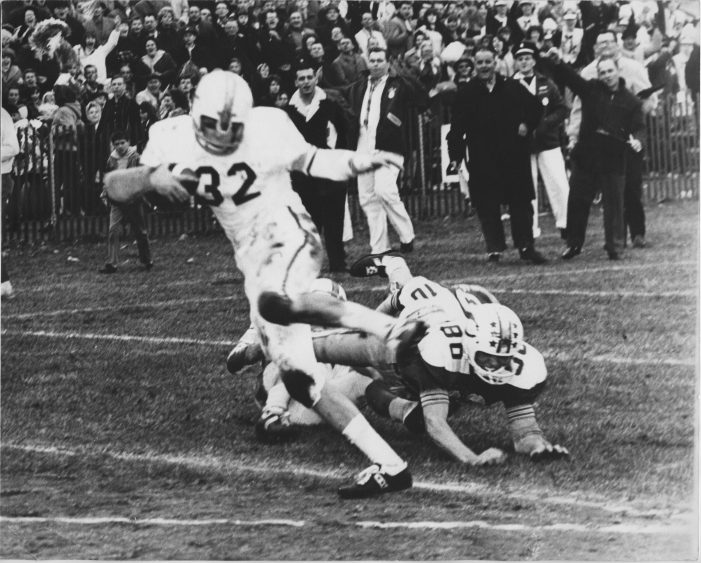 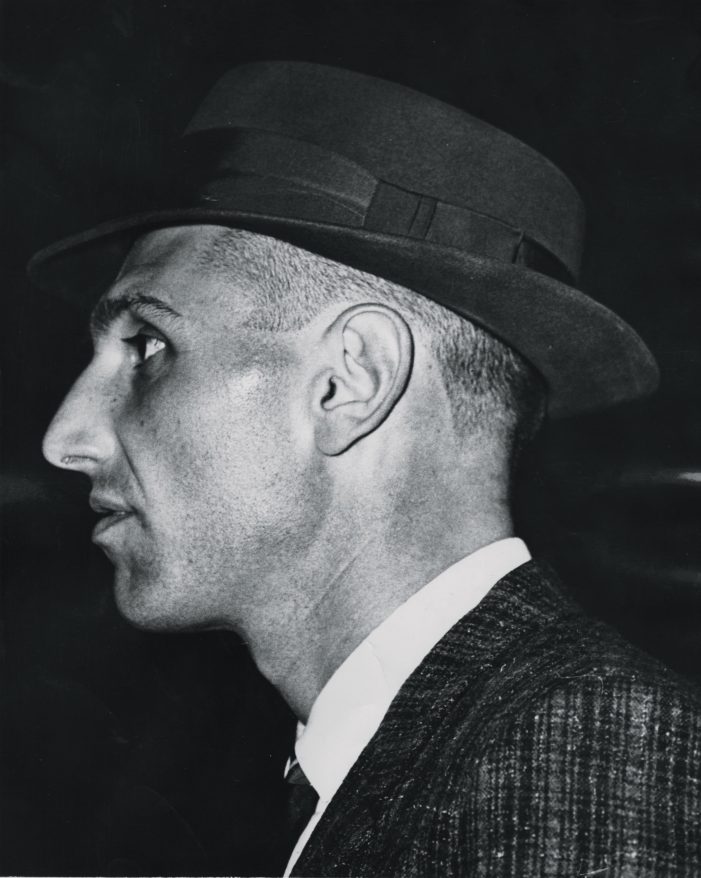 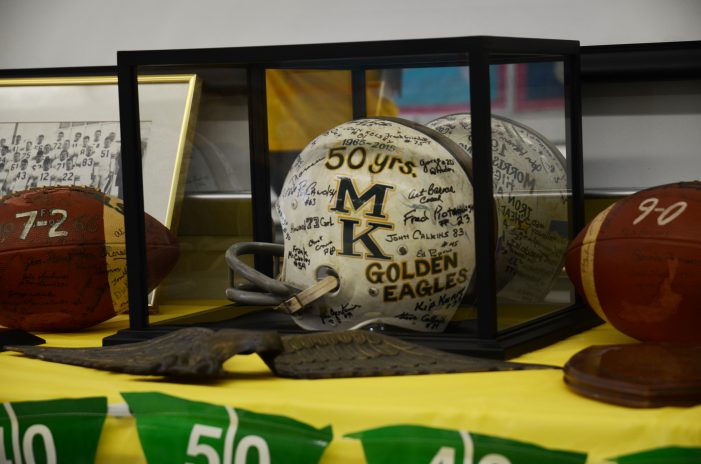 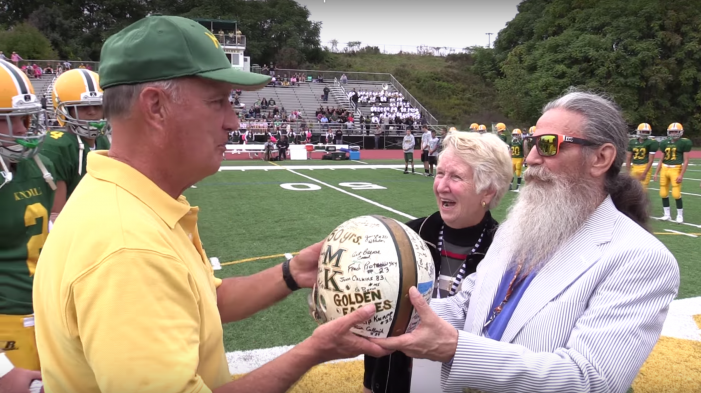 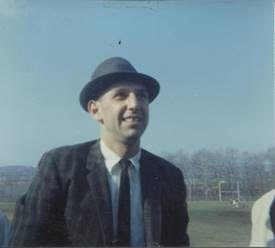 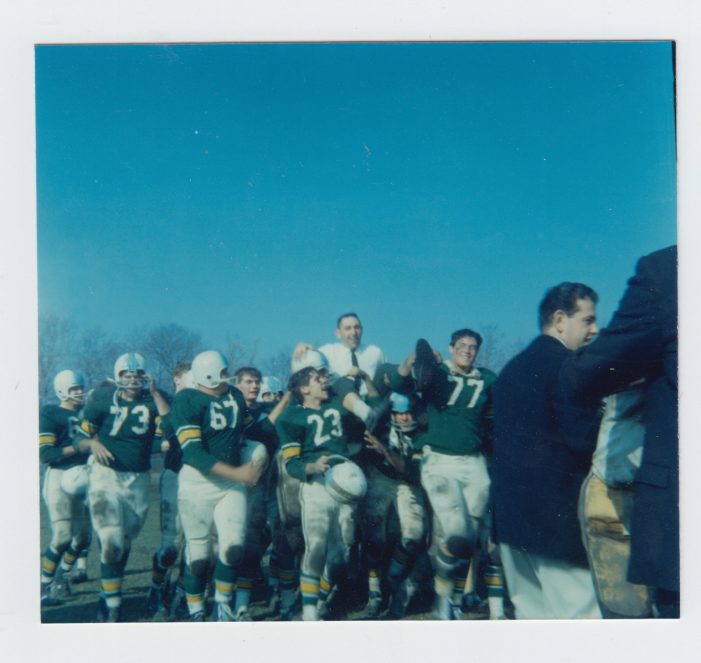 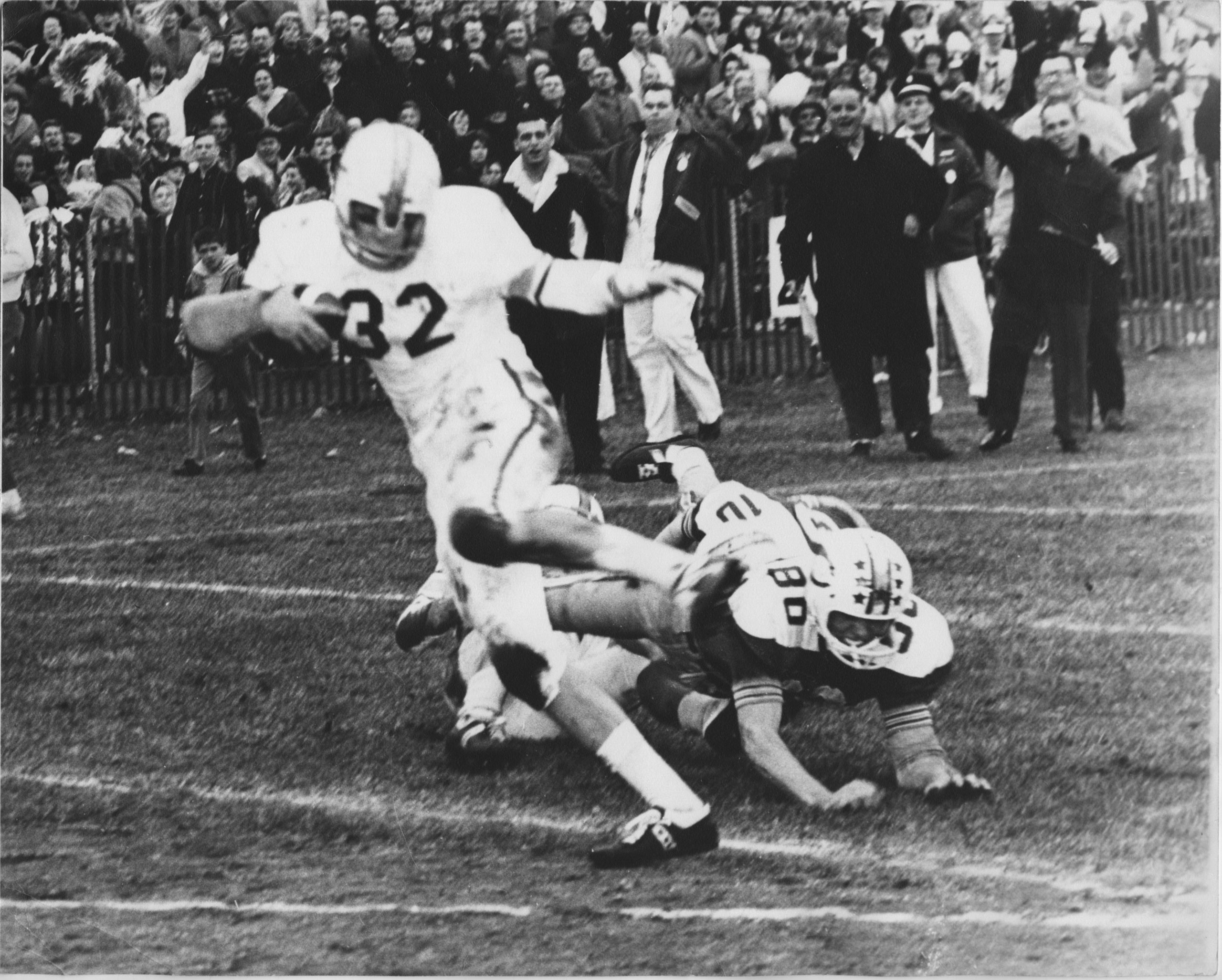 This is part the story of a great football team, the 1965 Morris Knolls Golden Eagles.

More so, though, are the life lessons that they were taught by their coach that lives on in them today, and of “the Helmet,” which traveled cross country twice courtesy of two former players and a fan of the team who was a few years younger, so that every member of that team could sign it and it could be returned to the school on Homecoming 2015, the 50th anniversary of that glorious season.

“I didn’t know anything about them really,” says Rich Luttenberger, who produced the brilliant 27-minute documentary, Return of “the Helmet”: A Team, A Journey, And the Man Who Inspired Them All, that tells the story. What Luttenberger has provided, with lots of help from former players and community, is vivid memory of something and someone very special in photos, newspaper clippings, and interviews about that club – some of them losing just one game while freshman and sophomores at Morris Hills High School, then being split up by the development of the new Morris Knolls High School – that outscored its opponents, 240 points to 40, (that’s 24-4 per game), going undefeated and winning the Iron Area Conference title, and the story of how their Head Coach, Frank Marino, saved a life.

It took three years to complete the documentary, which was unveiled in November 2019 and is available for viewing on You Tube. “There’s just so much pride from that group and in their school and in Coach Marino and that generation,” says Luttenberger. “There’s such humility, such pride in what they’ve accomplished and have been able to keep together for 50 years – it was really impressive.”

“the Helmet,” a 1965 Morris Knolls team helmet, was in James Souvay’s possession, which he knew he had to 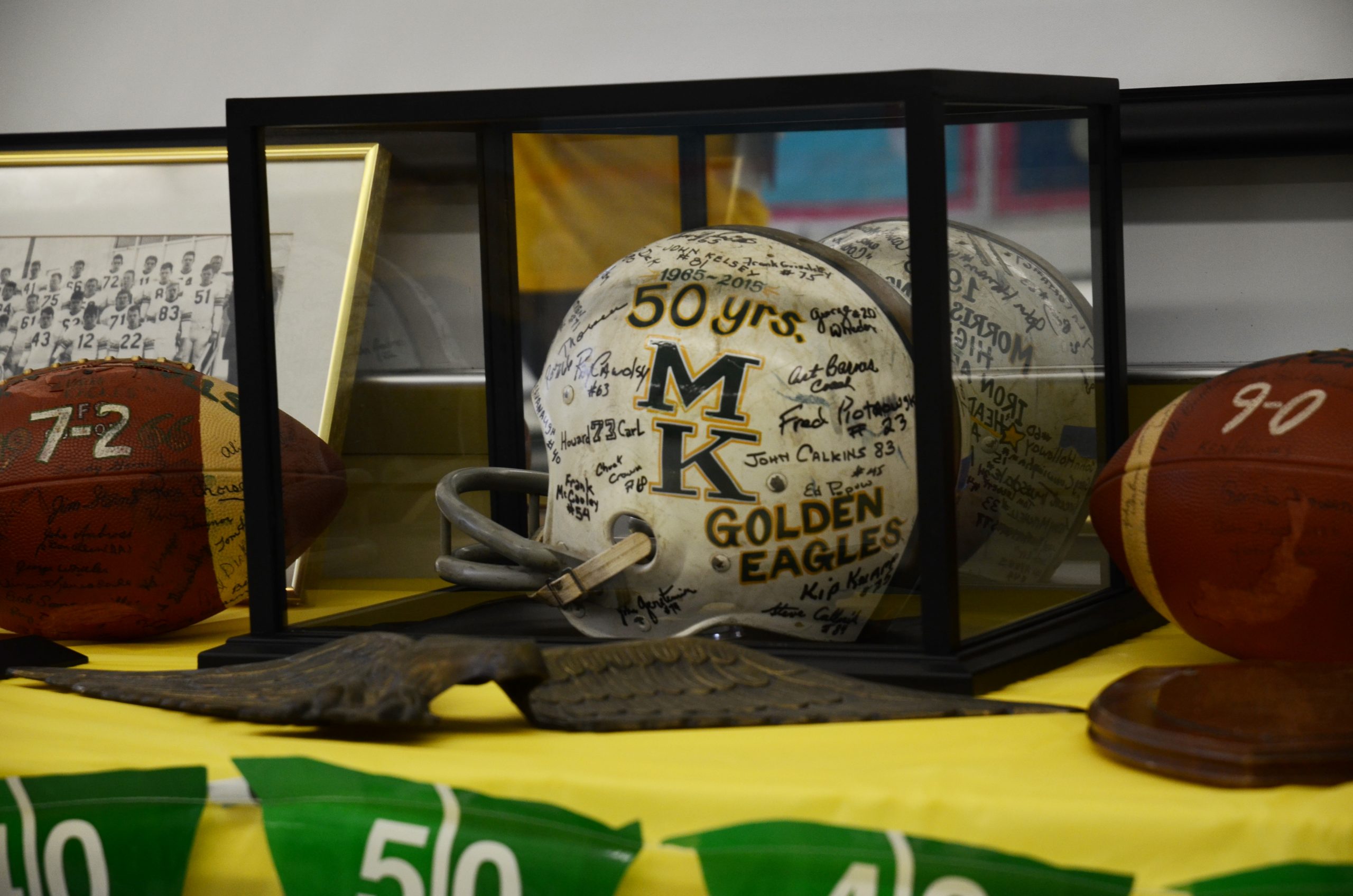 unearth as a special tribute to that 1965 club. The Phoenix based artist Souvay, teammate Greg Francis, and a fan of the team, Art Baggot, made sure it traveled across the country (it did so twice), each former player signing it, holding a placard with their uniform number, taking a photo with it, and sending it on to the next person on the list. If the player they passed it to had passed away, their family members signed the helmet and posed with it.

Frank Marino, who passed away in 2011, coached Morris Knolls for three seasons, then went on to an illustrious 42-year coaching career at Muhlenberg College in Pennsylvania. He had a 54-40-6 record in 10 seasons as a gridiron coach, is the All-time winningest Muhlenberg football coach, and was named MAC Coach of the Year in 1976. He also coached Volleyball for seven years, going 124-81, and is also the school’s winningest coach in that sport. Their 27 wins in 1992 is a school record for all sports. Marino also coached men’s and women’s lacrosse, and the football field at the school is named after him.

His record being impressive, it was what Coach Marino taught on and off the field that has endured. His rules for his players were ethical and profound: don’t celebrate in front of or embarrass or show up the opponent; keep your head down, shuffle your feet; be humble.

Souvay, now 70, was on his way to quitting school, a leather jacket his garb of choice. “I was flunking everything, even gym class.” Souvay, who called himself “a foul ball,” was approached by Marino in the hallway, who saw potential in him. “He got me out in the hallway, and he said, ‘If you listen to me, I’ll get you on the football team, I’ll get you a varsity jacket, and I’ll get you into college.’” Souvay was incredulous. “I asked him, ‘So, what do you want from me?’ And he said, ‘I want that leather jacket.’ Souvay played halfback and placekicker that 1965 season, and when it ended, Marino one day yanked him out of a class, told him to get his leather jacket out of his locker and put it on, and Marino and some senior squad members marched him to the middle of the football field to the 50 yard line, where there was a big box of varsity jackets. Marino pulled out Souvay’s brand new one, a #10 on it, gave it to him, and then asked the latter for the leather jacket.

The trade was made, for Marino had kept his word. Souvay eventually even went on to the University of Minnesota.

Carroll Brown Marino, Frank Marino’s wife, says of Souvay and her husband, “I know my husband used to say he 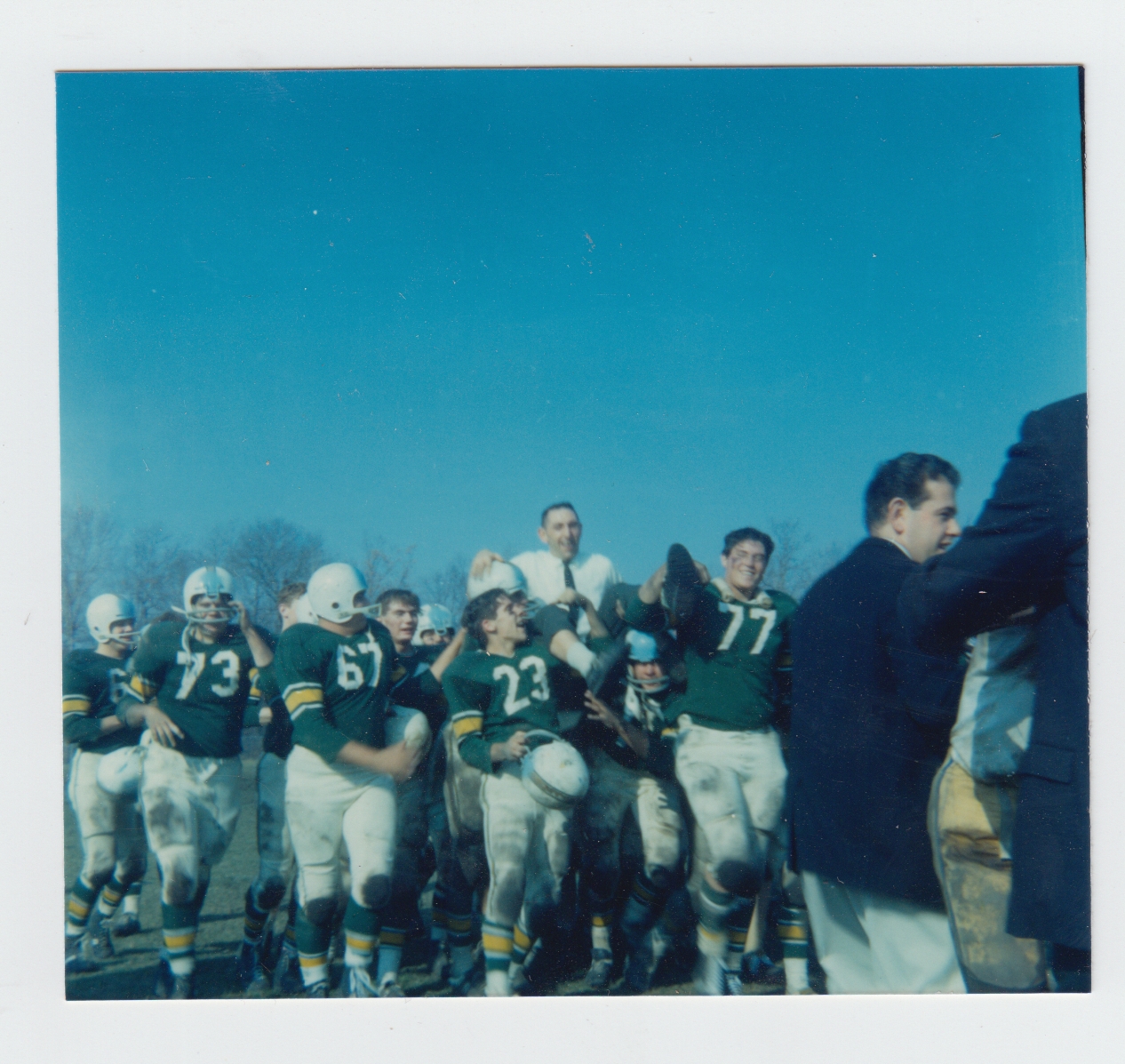 was happy to catch that kid at just the right time that it made a difference.” And that special day in 2015, when she and Souvay walked the field with “the Helmet,” attending members of the 1965 team touched it, as did the current Golden Eagles, until eventually Bill Regan Jr. (whose dad, famed Delbarton coach Bill Regan Sr., was great friends with Marino) was handed the historic helmet by Souvay. “It was hard to believe that that much time had gone by,” she says. “I just kept reveling that 50 years had gone by! Here I was, on the field, with Jimmy and Bill Regan, thinking about his father and Coach and all that happened here. Sheer time, effort, work, caring, involvement, connecting – all those things were right there in front of me.” She was present at the coin toss as well. “All of this flashed through my mind. Goodness gets goodness gets goodness. Coach made every effort to make sure Morris Knolls got off on the best foot it could get off on because he knew that how you start a picture, a situation, a team, you start on the best foot, and it will grow in that positive best direction.”

“That’s why that man’s photograph its right here (in his home office) next to a photo of my grandmother,” says Souvay. “The man meant so much to me, he made me think I could do anything.”  Marino also kept the leather jacket in his attic and used it as a recruiting tool, relaying the story to high schoolers for inspiration. Souvay adds, “May I relate to you what occurred the last time I saw my friend. In 98′ Muhlenberg dedicated and named their football field after him. As he accepted his significant award on the field, I was aware of an emotional wave rolling over me. I had to go below the bleachers to compose myself. Tears were coming out of my head. ‘What was this?’ Not understanding had me confused. But then the explanation came as a rush. It was pride, happiness. A great amount of it. I never told Frank, or anyone else. ‘Pride’. The good kind. So, there you have it, I am still quite proud of everything about my friendship with that man.” He also states that Marino asked him that day if he wanted the jacket back. “I said, ‘No, are you kidding me? That never comes back to me. That belongs to you.”

The fact that her late husband lives on in his former players and others who knew him is most important to Carroll Brown Marino. “There’s so many of these incidents that are tied to Morris Knolls, Muhlenberg, and New Jersey, that he planted without knowing all of these seeds that just keep giving back to me. But those seeds were not planted just for me; it was how he thought he had to live his life. All of that has grown and has come back to me and has made my life so full, even though there is such a big hole in it since Coach isn’t here with me. But it’s been just incredible.” She then further reflects. “His own father died when he was 9. He wanted so much for his players to have a strong, male figure in their lives. His ability to supply for them a strong role model and value and intelligence and commitment – he wanted (all) that for his players.”

Souvay, who is a cancer and, of course, life survivor, chokes up when asked what he’d say to Marino today. “I’d tell him I love him.”

And “the Helmet” is back where it belongs.