The girls that make up the Roxbury High School Gael Gymnastics team certainly have something to flip about; they are the first gymnastics team in school history to go undefeated through the regular season with a final record of 10-0. 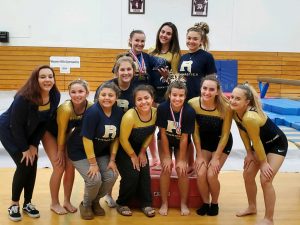 Roxbury gymnastics first competitive season was in 2018 after a group of parents and interested students lobbied the school board to begin a competitive program at the high school level. The current team is made up of two freshman, five sophomores, two juniors, and three seniors. The three seniors, Megan Merola, Tiffany Zieba, and Ashley Miller, all serve as captains of the team.

“Just being on this amazing gymnastics team meant so much to me, being a captain meant even more. I have been so proud of the support that all the girls give each other. We have built a second family who will always be there for each other on or off the mat. I have seen that no matter your skill level every girl on this team is equally important because each girl contributes a vital part that’s makes up the positive dynamic that resulted in our undefeated season.” Megan Merola said.

Coach Kellie Damelio, in her first season as head coach of Gaels gymnastics, couldn’t be prouder of her team and the strength and perseverance they showed this season. Damelio has a laid-back coaching style and credits her gymnasts for pushing themselves during practice.

“It’s really nice to see the girls grow. I’m happy to see them a little bit scared but pushing themselves to try new skills and tricks. They practice and practice and all of a sudden it all comes together and it’s one of those amazing moments,” Damelio said.

“Our win against Mount Olive was really exciting. When we realized we won by a tenth of a point, even the girls who didn’t compete were happy.” Alexis Merola said.

While their record on NJ.com shows one loss, it’s simply one giant misunderstanding. During a meet against Indian Hills, when the Roxbury team arrived, they found that another school was present. Since Roxbury had already participated in their one required tri-meet for the season, they were confused as to why another team was present at their meet with Indian Hills. After much discussion at the NJSIAA and athletic director level, it was decided that the other team could count it as a win, but Roxbury did not have to count it as a loss.

“I think we became really close this year as a team and we’re always like a family. We were really worked up at first with that particular meet. As a captain, I really had to talk to the girls and we realized as a team that we really had to calm each other down and handle the situation and we handled it together.” Miller said.

On Oct. 22, the Gaels rocked their meet at League B championships, placing first by over 3 points. Zieba also had much to celebrate as she won the gold for the all around competition, the gold on vault, the gold on bars, and the gold on floor exercise. She also won the silver medal on beam.

“I started gymnastics at the age of 10 which is late for a gymnast. I’ve grown up so much through this sport and all the lessons I’ve learned have helped me so much through life. I’ve been able to look forward to something after school. Winning at leagues made me so happy and the best thing was being able to have my team there to cheer me on as I accomplished what I wanted to.” Zieba said.

“High school gymnastics is a whole different feel than club gymnastics. I have been a club gymnast for a long time but I still get really nervous before my meets, but the team has been so supportive.” Valdes said.

Athletic Director Stu Mason couldn’t be prouder of his young gymnastics team. He knows what these girls go through at practice daily and he is always impressed with their dedication to their sport and their school.

“Whether you are playing field hockey, football, or competing as a gymnast, there are always expectations for each program. Our gymnastics program has really represented and embodied every challenge in their way. They are everything we want Gaels to be and represent. To have these girls wearing blue and gold is an outstanding fete and even better, they are all outstanding young ladies on top of that.” Mason said.