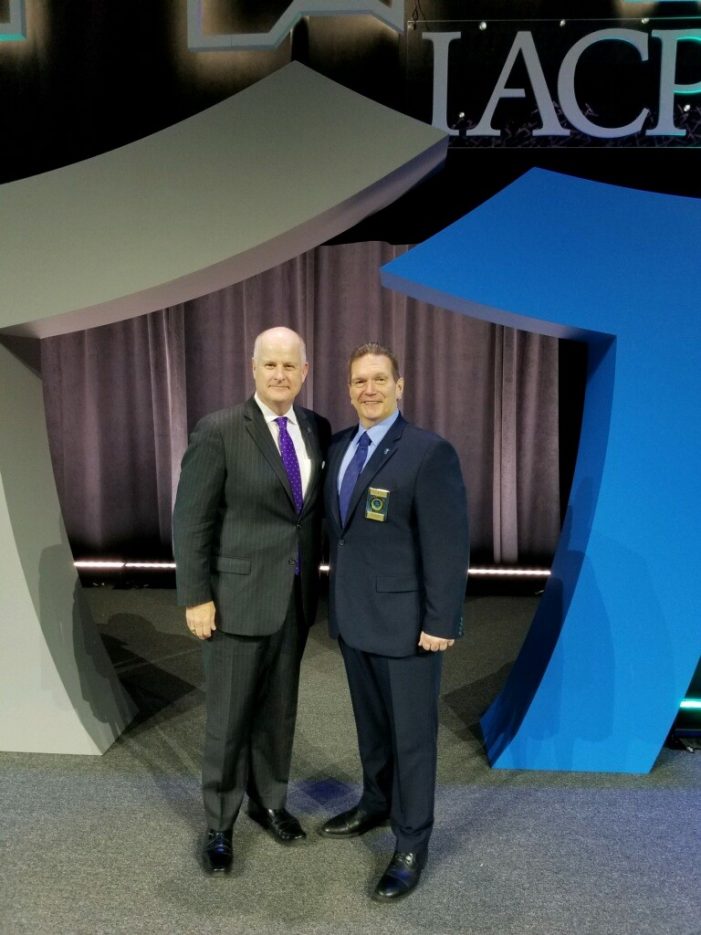 Morris County Sheriff James M. Gannon and founding partners in the Hope One mobile substance use recovery program received an esteemed award for their public-private venture from the International Association of Chiefs of Police, the largest professional association of police leaders in the world. 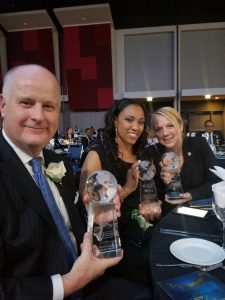 “Hope One was based on a simple concept of treatment providers and specialists bringing critical recovery and resource services directly to people who may be too exhausted, frightened or overwhelmed by addiction to seek help on their own. Hope One, with its steadfast, compassionate team, has saved lives and is committed to keep doing so,” Sheriff Gannon said.

The Morris County Sheriff’s Office and its Hope One partners – the Rockaway-based Center for Addiction Recovery Education and Success (CARES), Daytop New Jersey, Prevention is Key (PIK) and the Mental Health Association of Essex and Morris – are the collective recipients of the award named in honor of retired University of Washington Police Department Chief Michael Shanahan.

The non-profit Family Promise of Morris County, which specializes in finding emergency and permanent housing for homeless individuals and families, came aboard Hope One after its launch to make sure clients had essential toiletries and assistance in finding housing.

The award bestowed by the Security Industry Association and IACP, a global organization that prepares the next generation for the future of law enforcement, recognizes outstanding achievements in the development and implementation of public/private partnerships to promote public safety.

Sheriff Gannon was joined at the IACP Annual Banquet – the culmination of the 2019 IACP Annual Conference and Exposition – by Morris County Sheriff’s Office Bureau of Law Enforcement Undersheriff Mark Spitzer, Sheriff’s Office Corporal Erica Valvano, the coordinator of Hope One, and Madine Despeine-Udoh, the Director of Self Help, Advocacy and Education for the Mental Health Association of Essex and Morris.

Corporal Valvano and Director Despeine-Udoh are core Hope One professionals, along with Kelly LaBar, a Certified Peer Recovery Specialist from CARES.

Recognizing that opioid overdose deaths were reaching dire levels, Sheriff Gannon in January 2017 brought together law enforcement, substance use and mental health specialists for a solution.

The result, after just three months of planning and the formation of a partnership between law enforcement and non-profit agencies, was the launch of the Morris County Sheriff’s Office Hope One program on April 3, 2017.

Hope One is a mobile substance use recovery and resource outreach vehicle that was retrofitted out of a defunct SWAT vehicle.  With $15,000 from drug forfeiture funds, the vehicle was stripped of all law enforcement markings and painted white and purple, a color symbolizing recovery.  Its license plates read: “Hope One.”

Hope One travels at least twice a week, and often on weekends, to locations in Morris County that are known for opioid overdoses, homeless encampments, community soup kitchens, and areas where at-risk populations are known to congregate.

With the help of the Morris County Sheriff’s Office and the Hope One staff, the city of Newark and counties of Burlington, Atlantic, Cape May and Monmouth have replicated Hope One and are on the road.

With a stigma-free approach and toiletries, snacks and beverages to put visitors at ease, the Hope One staff from the start has made a new contact every 10.8 minutes. Individuals who request Narcan training aboard Hope One are given a free Narcan kit to take home, and 38 people have returned the used kits to Hope One after using the Narcan to reverse an overdose.

“Hope One, led by Sheriff Jim Gannon and his team, is the best example of a best practice between criminal justice and the substance use disorders treatment and recovery communities,” said James Curtin, Chief Executive Officer of Daytop New Jersey.

“Daytop New Jersey is grateful to play a part in this tremendously effective effort to get persons desperately needing treatment – as opposed to incarceration – connected to life-saving treatment,” Mr. Curtin said.

CARES, a project of the non-profit Prevention Is Key (PIK), has provided the critical expertise of Peer Recovery Specialists and its access to treatment providers to greatly bolster the success of Hope One. As has the Mental Health Association of Essex and Morris since many people struggling with substance use disorders have a co-occurring mental health disorder.

“Hope One, under Sheriff Gannon’s leadership, has provided life-saving and life-changing services to the Morris County community. We are honored at the Mental Health Association to be a part of it,” said Robert Davison, the Association’s Chief Executive Officer.

Melody Runyon, Associate Director of PIK, said she sensed from the start that Hope One would be impactful.

“Prevention is Key and CARES are thrilled with the recognition by the International Association of Chiefs of Police of both the Hope One project and its collaborative partners,” Associate Director Runyon said.

“From the early planning days, when key stakeholders gathered at CARES to bring Hope One to life, we knew it would be something special.  Hope One began as an admirable vision to change the way we help people in Morris County,” Associate Director Runyon said.

“We wanted to bring services directly to those most in need and to reduce the stigma associated with the disease of addiction and mental health disorders.  I believe Hope One has surpassed what any of us had envisioned both within Morris County and the state of New Jersey,” she said.