The Gloria Foundation Of Montville Supports Victims Of Domestic Violence 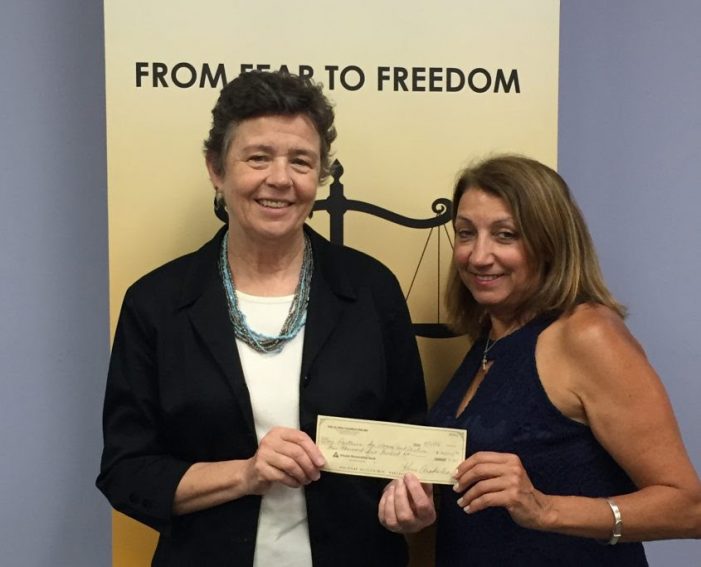 Recently on May 10, the Gloria Foundation of Montville held its third annual fundraiser raising an impressive $30,000 to aid those who are affected by domestic violence.

All proceeds went to benefit The Morris Family Justice Center, a domestic abuse shelter for Morris County. Started in 2016, The MFJC is an all-encompassing center where all of the needs of domestic violence survivors are all taken care of in one place: From counseling to protection, to legal services, to children’s services, to whatever is needed.

In the words of Patty Sly, director and CEO of the MFJC, she terms the organization as a “one stop experience for the client.” She says, “It is the best practice for serving domestic violence victims.”

his year, approximately 150 people gathered at the Waterside Restaurant in Bergen County to celebrate and aid the Gloria Foundation in this worthy cause.

“I am so thrilled that people were so generous,” says Karen Arakelian, founder of the Gloria Foundation.

The Morris Family Justice Center was elated with the money as well.

Domestic violence, it is the darkest most awful thing people can endure. In addition to the physical often life-threatening battering the body takes, the psyche, self-esteem and emotions are also battered.

And the numbers are staggering. It is reported that of those who are involved in an intimate relationship, on average nearly 20 people per minute are abused!

That breaks down to one in four women and one in seven men.

“There is such a need for help,” Arakelian asserts, and she is extremely insightful about the need for awareness about domestic violence. This includes the changing roles regarding abusers and victims, how they have no recognizable face.  “It is not just women anymore,” Arakelian observes. “It is women, men, and even children.”

Often much worse than a scarred body, is the scarring of the soul. Victims of domestic violence often feel like there is no hope, that they are helpless, isolated and alone.

But there is a light at the end of that dark hell. With aid and empowering help, such as the kind the Gloria Foundation provides, the victims of domestic violence transform into survivors—survivors that can flourish and thrive.

The Gloria Foundation was lovingly named after Arakelian’s mother.

Arakelian is warm, articulate and passionate on the subject of the Foundation, showing that something good could come out of such horror.

“Domestic violence has had a big effect on my life,” she shares candidly; “My mother was a victim of domestic abuse. I saw what she went through. In a way it gave me drive, I realized I didn’t want to be dependent on anyone. I wanted to give back, to do something in her memory.”

And both the foundation and fundraiser was a wonderful way to do just that.

Sly has nothing but praise for Arakelian and the Gloria Foundation, thanking her profusely remarking, “She has a passion for the cause and a vision to serve.”

When asked why the Morris Family Justice Center was chosen for the donation, Arakelian says, “When I first heard about the MFJC, I cried. I was so impressed that they are a comprehensive center where all needs for the survivor is taken into account. I wish that such a place existed for my mom when she needed it.”

It is impossible to put a number on just how many people the Gloria Foundation and The Morris Family Justice Center has helped, but Arakelian asserts that since the MFJC has opened at least over 1,000 people have been aided for the better.

During the night of the Gloria Foundation’s fundraiser, there were performers, a silent auction, speakers, a raffle, a DJ, dancing and much more.

Despite the fun and celebration, the cause of aiding domestic violence was never far from anyone’s mind.

The highlight of the night in Arakelian’s mind was the moving rendition of “Love the Way You Lie,” the Eminem and Rihanna song that her musician son and partner emotionally performed for everyone.

“So many people came up to me saying that they never really thought about domestic violence from the abuser’s perspective, what they were going through—the stress that they feel. It was another perspective to consider.”

In addition to raising even more money for survivors of domestic violence in the future, when asked what she wants to see for the Gloria Foundation, Arakelian is both adamant and hopeful: “Education for both boys and girls,” she asserts. “We want to focus on prevention for our young people rather than the outcome, so that there will be no more victims out there.”

And Sly absolutely agrees, “One of our many objectives is to educate the public and professional groups to detect and respond to partner abuse, teach teens about dating violence and how to protect themselves, and council abusers  to help them understand and change their behaviors.”

Thinking back on her mom and what she would think of the Gloria Foundation and what they are doing to help in the cause of domestic violence, Arakelian says, “She’d love it. She was a great lady. She’d be very happy with this.”