The Kiwanis Club of Mount Olive Reaches out to the Community 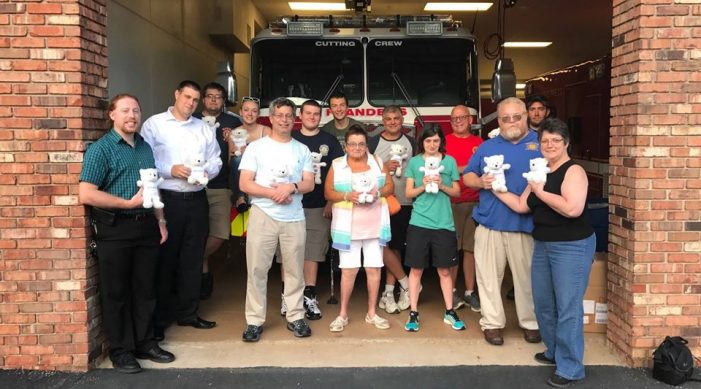 Some Kiwanis Club members in front of the Flanders First Aid and EMTs after them receiving their bears from the Caring with Bears project. Richard and Kelly Moore are on the right. (Credit Kiwanis Club) 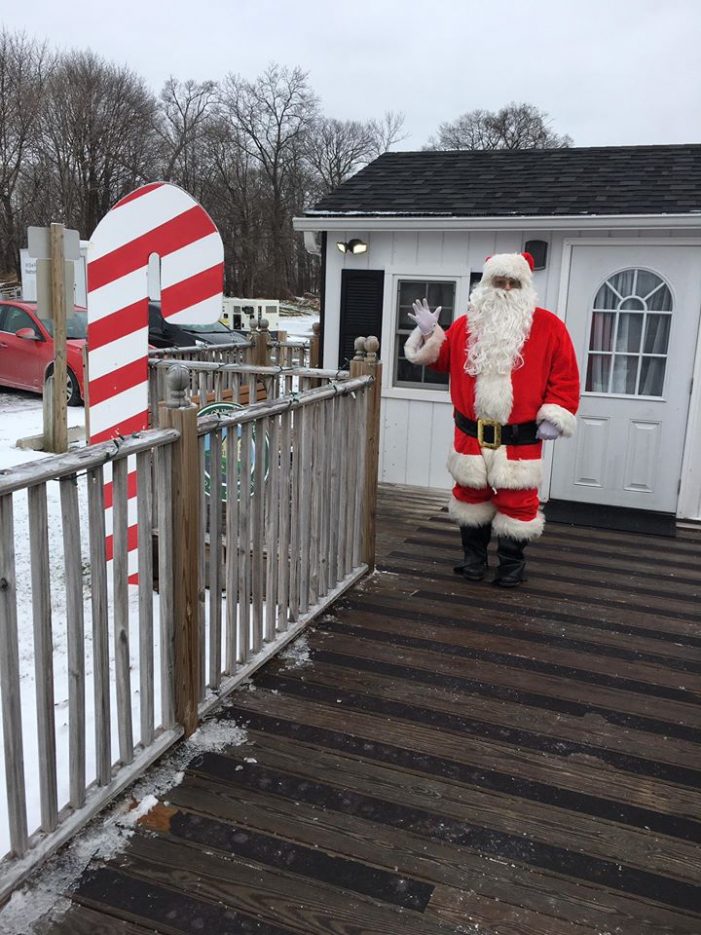 The Kiwanis Club is a global volunteer organization that annually raises more than $100 million and dedicates more than 18 million service hours a year to help children.

The Kiwanis Club of Mt. Olive is one of thousands of Clubs in the United States with those same objectives. It evolved as an outgrowth of the Junior Chamber of Commerce. (JCC).

“Kiwanis is all about local communities, and how we can help local children and families and make an impact,” said Richard J. Moore, Jr. the current president.

Moore is a charter member of the Kiwanis club. He joined in 1995. “Over time I became president. The first time was in 2000. I remained president for three years.” Moore was reelected to the presidency in 2009.

“The idea is to put people in leadership positions over time for a number of reasons. The first is to give other people the experience, and two, is for the life of the organization. You want to have people ready who can do the job, or who have done the job. The whole idea is to build on what has already been done.”

“The thought is that you train people to do jobs, and they stay on for the long run, so as the presidents change, there are people there who know how to do the job, but they are not in a position to have to do it. It’s a way of reinforcing the future.”

The Kiwanis Club works year-round on various projects that fit with their core community.

“We donated the school supplies to both the Budd Lake First Aid and Rescue Squad-Station 27, and the Mount Olive Pantry, who will distribute them to students. Thanks to all the members and friends of the Kiwanis Club of Mt. Olive, who gladly worked to provide school supplies to students in our local schools – items included backpacks, crayons, pencils, markers, etc..” said Moore.

“The Aktion club is where adults with physical and mental disabilities are taught leadership skills,” said Moore. “We do everything necessary to keep the organization growing. The Aktion Club is the only service club for citizens with disabilities where they will develop leadership skills by participating in the variety of service projects.”

“We sponsor a Key Club at the Mount Olive High School. The Key Club is a student-led service organization and has over 200 members and is active within the Mt. Olive community. For example, they run the Senior Citizen Prom at the Senior Center.”

The Key Club hosts events and service projects for members of the Mount Olive Community. “We teach Sponsored Leadership Programs (SLP). From the Aktion Club all the way down to the Builders Club. The idea is to teach students to manage volunteer projects that would benefit the community as a whole. We teach young students how to manage projects whether it’s a safe trick-or-treat night or something along those lines.”

“The benefit is that you’ve created a safe environment where you can say trick-or-treat for example. The kids are invited to come to the school in that safe environment and go from table to table to get some crafts or get some treats, that sort of thing. I think it’s much better and safer than having them banging on doors out in the street.”

“The Builders Club is a promise six years in the making. We’re trying very hard to get a Builders Club at the middle school. We’ve been talking to the activities director about trying to get it going. It’s a challenge because we have to go through the Board of Education. Any kind of youth group needs an advisor and he or she has to get paid. The Board has to approve monies to support that advisor, along with the financial requirements. So as is, it has been a challenge.”

Kiwanis is always marketing to bring in new members. “We basically market new members by going out and talking to everybody we know,” said Moore. “We use social media like Facebook, and Twitter to reach out. It’s just a matter of asking enough people questions. Sooner or later we reach the people who are interested. Our mission is to create community leaders, one student, and one project at a time.”

The safe trick-or-treat is just one example of Kiwanis teaching the students on how to manage those projects where everybody benefits.

“We have students who were involved in these programs and have gone on to become physicians, marine biologists, chemical engineers, lawyers, and more. The fact that they get involved gives them motivation and they feel better about themselves. They can accomplish the goals that they set for themselves. John Dewey, an American philosopher said, “We do not learn from experience. We learn from reflecting on experience.”

“Reflection is a critical part of any service project. It gives our members a chance to process what they learned from the experience and to think about what they can do moving forward. The impact of reflection leads to greater self-confidence, stronger problem-solving skills and an increased connection between members.”

The Kiwanis is best known for their signature projects. “It’s best to have a signature project and we have two,” said Moore. “One, we support the local pantry in Mount Olive. We’ve established regular food donation sites to support the Food Pantry. We pick up the food from 17 different locations every day, 365 days a year, with buckets or boxes of food for the Christ Episcopal Church Pantry in Mount Olive. I think our signature project is a win-win for business because when a business sponsors a bucket (of food) we put out press releases on a regular basis to let everybody know where the food is coming from, and the business locations. The business gets free press because their location is in the press release. It could draw people to their establishment looking for a place to drop off food or buy their product or service.”

“The second signature project is the Santa House I started as a Junior Chamber of Commerce (JCC) project. It is spreading joy to hundreds of children during our annual Santa House event.”

The Santa House happens every weekend after Thanksgiving Day. “This year we had four weeks with 16 shifts, of volunteers serving three hours apiece. Our volunteers did everything.”

In 1995, the JCC started an Easter Egg Hunt. And that project was carried over into the Kiwanis as well as the annual Easter egg hunt the members used to do.

“We reached a point where we were giving out 14,000 eggs,” said Moore. “It was becoming overwhelming so we ultimately gave that to the Key Club so that they could do it inside no matter what the weather. When we did it at the park, we charged an entrance fee of five dollars per child, and they could pick up as many eggs as they wanted. Sometimes we would put prizes like a coupon for a stuffed animal, or some other prize such as a piece of candy within the egg.”

“We had great participation because we had some Aktion Club people and some young people around 12 or 14 joined in the fun. It is now sponsored indoors by the high schoolers.”

About seven years ago, Moore’s wife Kelly, started a project called Caring with Bears. Its intent is to provide comfort to children in traumatic situations.

“Caring with Bears is designed to give out stuff bears to children who had been in a distressed situation, perhaps at home, or they were on their way to a hospital, or where there was a police investigation or there was something going on with the child’s life that was making him or her feel anxious or uncomfortable,” said Moore. “The police or the EMTs actually give out bears when they go to the residence.”

To date, the Kiwanis has given out over 300 bears. “We usually give the bears out in bulk of 50. To date Hackettstown Regional Medical Center received 50, Saint Clare’s in Denville got 50, Flanders First Aid and EMTs got a total of 100 (in two batches of 50) Budd Lake First Aid got 50, and the police department got 50.”

The Kiwanis also gives out two $500 scholarships to high school students each year. Up until recently it was anybody in the high school, but that had to change because the volume of applicants increased dramatically. The plan for the future is to give scholarships to only Key Club members. “It has become so popular that it’s taken us five hours to review 32 applicants.”

Although serving local communities is their focus, on an International level, Kiwanis’ is part of a global campaign for children, called “The Eliminate Project”. It is Kiwanis’ aim to eliminate maternal/neonatal tetanus. Its goal is to raise $110 million and save the lives of a 129 million mothers and their future babies. In partnership with UNICEF, Kiwanis is committing to eliminating a disease that kills one baby every nine minutes.

“By providing a generous donation, you have the ability to directly impact the Mt. Olive community,” said Moore. “Further, the Kiwanis Club of Mt. Olive, New Jersey Foundation, Inc., is a registered 501(c)3 public charity, meaning your contribution (but not membership fee) will be tax-deductible to the fullest extent of the law.”

“Becoming a member of Kiwanis offers a great opportunity to get involved in your community, network and socialize with others,” said Moore. “You can make a difference in the lives of children and those in need. Want to join us in making a difference in Mt. Olive? Send us a message or join us at our next meeting (every first and third Thursday 7:30PM) at Adam’s Restaurant in Budd Lake.”

To donate, please use the PayPal link or donations may made out to “Mt. Olive Kiwanis Foundation” and mailed to P.O. Box 621, Budd Lake, New Jersey 07828

For additional information on the Kiwanis Club of Mount Olive, contact Richard J. Moore, Jr. at 201-841-7783 or e-mail rjmoorejr@optonline.net.