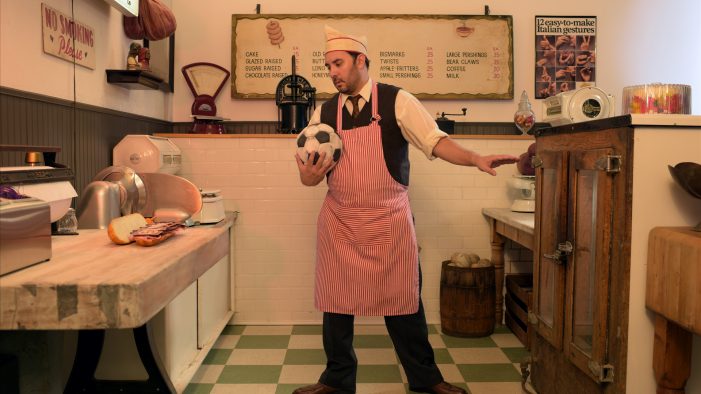 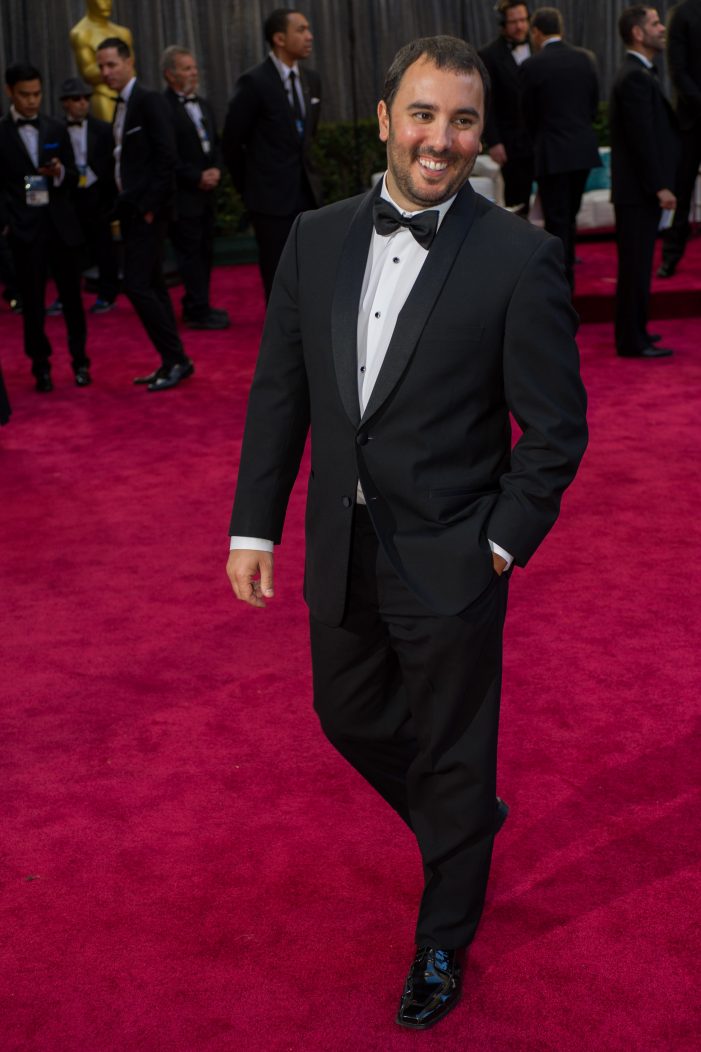 PES, Oscar®-nominee for Animated Short arrives for The Oscars® at the Dolby® Theatre in Hollywood, CA February 24, 2013. 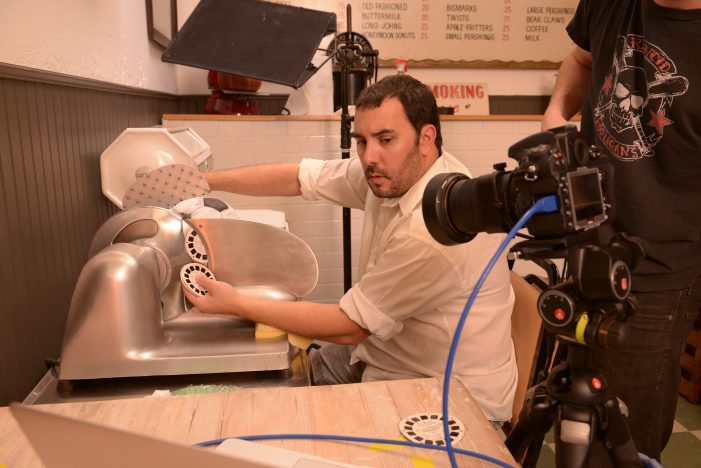 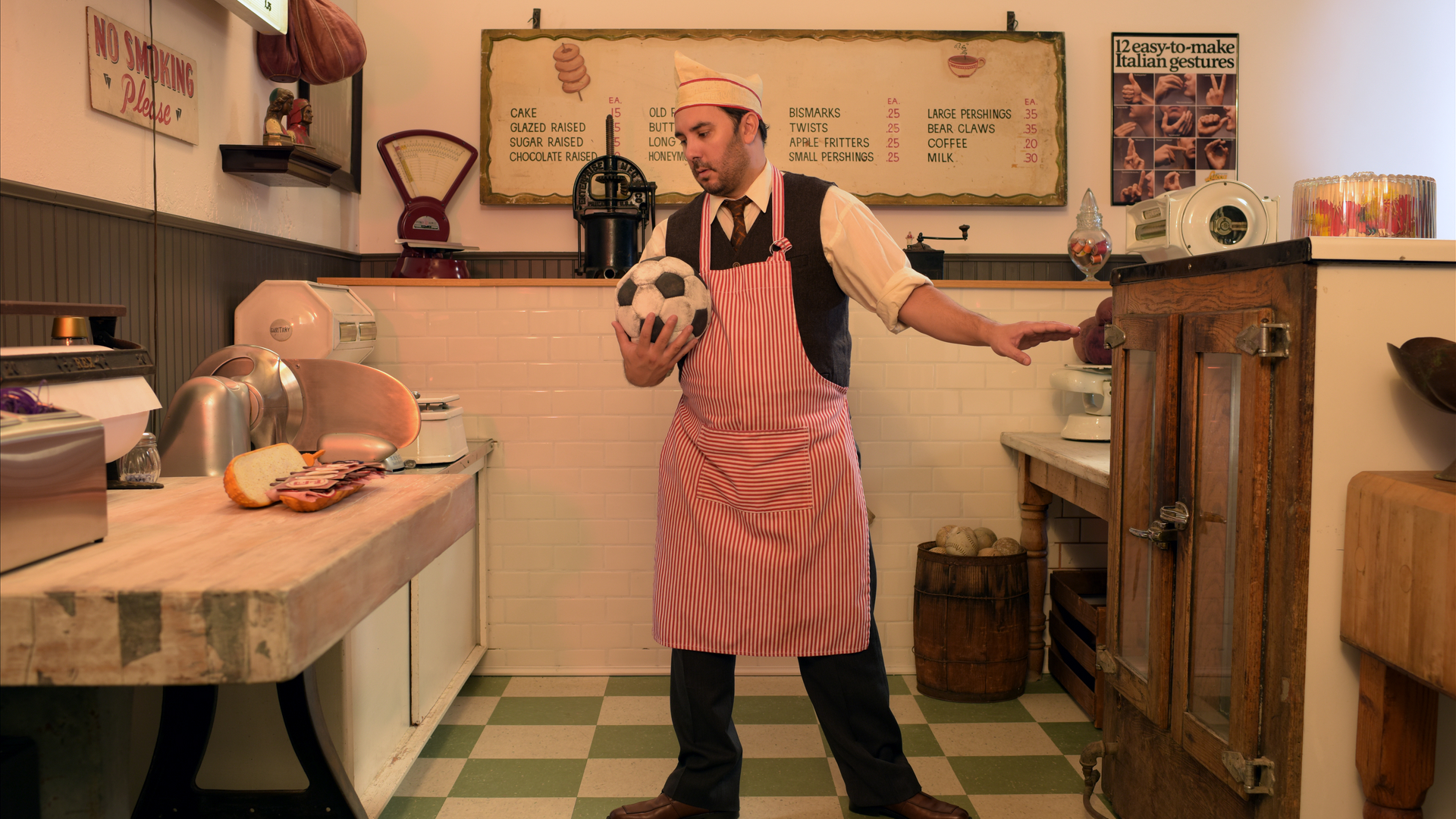 He’s the ‘stop-motion master,’ creative genius behind Roof Sex, Western Spaghetti, Human Skateboard and many other visionary short films. For PES (Adam Pesapane) — twisting  people’s perception of the familiar has always been exciting to him.

“It’s the joy I get as a creator, you not only give people a good experience but leave them with an idea they never thought possible — that avocados look just like grenades (Fresh Guacamole/2012 — shortest Oscar-nominated film that was included in Showtimes Short Stories),” the Budd Lake native says.

Currently animating BUTTONS, PES says there are few objects with such a universal positive association. People don’t like to throw them away.

According to the artist, we get attached — maybe because they have little eyes looking out at us, or warmth of connection and affection.

“They are right to see this object in a different way,” says PES. “I’m expressing my appreciation for buttons as an aesthetic object and the creativity gone into a simple circular shape over the last 600 years. You hope it gets communicated and people feel it in the film.”

PES’ artistic leanings date back to his Jersey youth, where he took watercolor lessons from a children’s book illustrator in Long Valley. The streak continued in college, as he studied printmaking and made his own books in 15th-century copper-etchings at the University of Virginia.

He doesn’t make films to generate a message, but encourages connections within the world around us.

In his (2002 stop-motion short Roof Sex), two chairs represent people with ‘legs,’ ‘arms’ and ‘backs.’ PES used doll furniture to teach himself how to animate (since he had no prior film experience).

One seat, a family heirloom, was given to the artist by his parents.

“I thought, ’what would these chairs want to do after being cooped up in the living-room for 25 years, Roof Sex.’ There’s anthropomorphism there,” the animator says. “A candy corn is a candy corn to a billion people but if you make the animation look like a flame it can easily become fire.”

The possibilities are endless.

“It’s wonderful to think anything I can put in front of the camera and manipulate one frame at a time can become a subject or a movie,” he says.

This is how PES’ mind works. He says his films try to make you believe in an alternate reality.

In Submarine Sandwich (2014) there is an Italian deli stuffed with old sporting equipment because from the outside ‘it looks kind of like it.’

His first viral phenomenon, Western Spaghetti, he used dice as sugar cubes. As one could imagine — it’s tough for PES to walk into a supermarket. Every time he sees a pile of avocados, he thinks, grenades.

“Potential all around us for inanimate objects to become other things,” says the filmmaker. “That is the joy of filmmaking.”

The first film he shot (2006) on a DSLR camera didn’t have the Live View feature essential for stop motion.

So PES faked it with his Canon 20D by taping a digital camera through the viewfinder.

Dragon Frame created the software to interface with all the DSLR cameras and provide the tools he needs to compare/contrast frames and line everything up with the LIVE feed.

“It’s hard to imagine going back to a time where we had such trouble seeing the quality of our animation as we were doing it,” says PES.

His biggest influence as a filmmaker is Czech surrealist Jan Švankmajer.

“I discovered these films around the time I was getting interested in making a short film of my own,” PES says it awakened something in him. “Made me realize I love this stuff and have to create in this medium.”

When he ran out of money and no-one would hire him because he was the guy who did Roof Sex, the artistic talent had to dig into his own pockets and start making little films with little objects.

Back in the day he felt we were moving towards a place where re-watchable was the most important thing.

“Better to make a 10-second film people watched five or 10 times than it was to make a three-minute film they watched one minute of,” PES says. “My philosophy is ‘short is powerful.’”

Once his work caught on he got hired by big brands to do commercials, which allowed him to play on a different level because you have a lot more money. The animator says he doesn’t have that kind of money for his personal art.

“It’s also good to remind yourself you can return to your roots and make a film on your own,” says PES. “I was inspired by advertising — that short storytelling and rapid editing. It’s always a struggle as an artist to figure out how you’re going to pull together the resources to make a film.”

It’s about reinvention. The animator didn’t think anyone, including his family, considered he would quit his advertising job (there he had access to the short content coming out of Amsterdam and Sweden) and sit on a hot roof for two months in order to make that film.

“But it changed my life” says PES, of perhaps going into years of debt for shooting a one-minute furniture ‘pornography’ film if it wasn’t successful was daunting.

“You have to jump blindly and hope your parachute opens,” he calls it his moment, even after everyone told him they didn’t get it or it was stupid.

“When I got the accolades (Best First Film award at France’s Annecy Animation Festival) and worldwide response to Roof Sex, it rewarded the chance I took with it and that I believed in myself.”

All the objects he works with, according to the animator, are part of our life and have a story to tell. It can be teased out of them or one may recognize what they didn’t see before.

It’s how PES relates to the world and learns about things in a deeper way.

Western Spaghetti (2008) took him on a New York City adventure to a 79th Street yarn store, where he hung out with 90-year-old women who helped him find yarn that looked like mozzarella cheese. He says they thought he was crazy.

“It’s fun to do these films and they are (also) a lot of work,” says the animator. “But I’m grateful there seems to be an appetite for them and an audience that appreciates them. They are artworks that express a unique personal point of view. I try to keep the authenticity.”