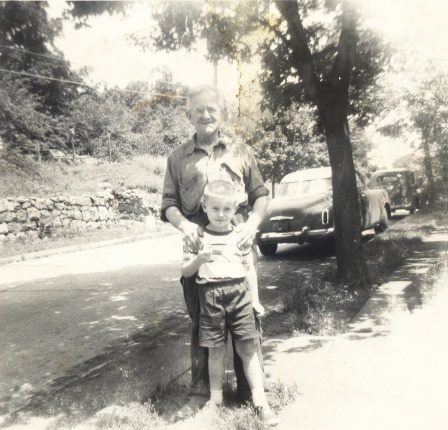 When I was a boy attending Boonton High School, I would often walk up to my Grandma and Grandpa Kemmerer’s home on Boonton Avenue, to visit with them. I would do my homework, at the kitchen table, as soon as I got there. That was Grandpa’s strictest rule. Then, after my homework was done, in the time left before supper was served, Grandpa would review my drum rudiments with me.

My grandfather, Edmund C. Kemmerer, was an accomplished musician. He could play the violin, the trumpet, the xylophone, the piano, and of course the drums. Grandpa was a volunteer firefighter and was a drummer in the infamous Harmony Drum and Bugle Corps, which was one of the most prestigious drum and bugle corps in all of New Jersey.

Grandpa also taught me to always wrap gauze in the area there between my thumb and forefinger, to avoid wearing off skin when I would be playing my snare drum in parades or at the half-time band performances at football games.

My grandfather had wanted me to learn to play the trumpet. He had even offered to give me one of his two trumpets. But my true love in the world of music was playing the drums. To some degree, now at 67, I somewhat regret that I didn’t take Grandpa up on his offer to teach me how to play the trumpet.

Grandpa Kemmerer was an electrician by trade. He was an independent electrician and had earned the respect and good will of the residents and merchants of dear old Boonton. Grandpa taught me some of the basic elements of electricity.

Grandma and Grandpa Kemmerer lived on the 600 block of Boonton Avenue. About a half-mile up from their home, atop nearby Ross Drive, in 1968 a small group of people began building an observatory. I was still a freshman at Boonton High. Grandpa and I would often walk up to where they were building the observatory.

I remember so very well, Grandpa telling me, “I can’t wait to see it when they’re done building it. It’ll be something to see, Richie. To see all the stars and planets, close up.” Sadly, the Sheep Hill Observatory wasn’t completed until 1973. Two years after Grandpa went Home to be with the Lord.

It’s been nearly 50 years since Grandpa Kemmerer passed away. He was a dear and kind man. He was a very intelligent man. Grandpa was very well read. He was a devoted member of the Boonton United Methodist Church. He served in the Boonton Harmony Fire Company for over 50 years. I still miss dear old Grandpa, oh so very much.