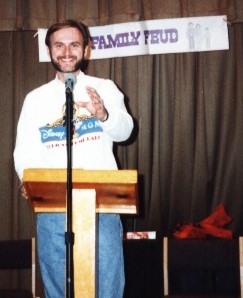 From the Autumn of 1988 till the Summer of 1998, my sister Patti and I served as Youth Group Leaders for the First Reformed Church of Lincoln Park. One of the absolute, most fun events that the teenagers held, on a regular basis, was the infamous ice cream socials. We would hold an ice cream social about three times a year.

The ice cream socials were very popular and well attended. They served a multitude of functions. First of all, they were just a great night out for the teenagers. A chance for them to have fun and fellowship in a safe environment of wholesome fellowship.

Secondly, because they were open to the general public, the ice cream socials were a great source of income to keep the youth group in operation. And, then there was the aspect of the entertainment. The young people would present a series of skits, a little play, a song and dance ensemble, or a presentation of a television game show. I confess that my favorite was when we presented a television game show. I got to be the game show host and it was just a lot of good fun!

My favorite of the television game shows, that we presented over the years, was Family Feud. It would require 10 contestants, five people on each team. Whenever I was the game show host for the evening, I would put a lot of thought into whom I would call up to be the players of the game show. There was a method to my madness.

There were always the teenage boys and girls who came to the ice cream socials without a date. They were either quiet or shy, they were far from being the cool cat boys on any of the sports teams, or the popular girls on the cheerleading squads. And, I confess that I identified with the teenagers who were not quite in the inner circle of the cool kids.

I would call up that quiet, shy teenage boy or girl, as my first choice for one of the game show players. I would interview the boy or girl and make a big fuss about them. I would compliment them on their watch, or the sweater they were wearing, or just tell them that they looked very nice. For those few minutes, that very shy teenager was the star of the show, in front of a big crowd of people.

Acts of simple kindness can have an amazingly profound effect upon another person’s life. I write these words, specifically to all of the young people out there. To the middle school and high school students, I share these thoughts.

It is all so easy to stay within our own circle of friends, to find comfort in the reassurance of being in the in-crowd. But, there is also something so wonderful and incredibly good about reaching out to someone in your school, who isn’t exactly the most popular kid in the class. There is infinite goodness found in reaching out to the student who is shy and quiet.

There is a very real, practical side to offering out the hand of friendship to that student who is quiet and shy. Odds are that you’ll find the heart-warming reward of having a new friend in your life. For whom you can learn from and to whom you can share insight with. It is truly a most rewarding thing.