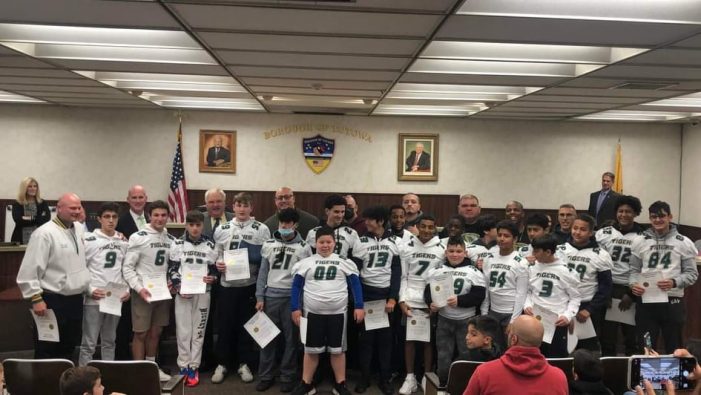 Pictured are the Totowa Tigers Senior Division team members who were given sports award certificates for their Patriot Bowl Championship win by Mayor Coiro and council members on Nov. 23. 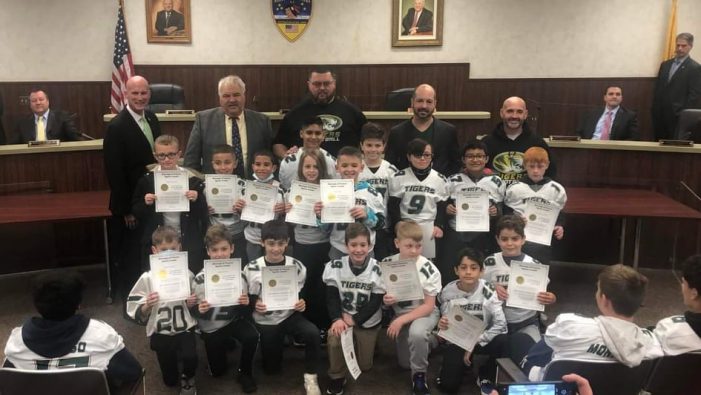 Pictured are the Totowa Tigers Pee Wee Division team members who were given sports award certificates for their Patriot Bowl Championship win by Mayor Coiro and council members on Nov. 23.

The Totowa Tigers won two division level championships in the Patriot Bowl that was hosted in the Borough. The league plays under the North Bergen Junior Youth Football League.

The winning teams were the Pee Wee Division (3/4) and the Senior Division (7/8). Both games were held at the P.A.L.’s new turf field on  Nov. 13, with the Pee Wee Division team winning against Ridgewood and the Senior Division team winning against Montville Township. Both teams were presented with sports award certificates by Mayor John Coiro and council members at the council meeting on Nov. 23.

According to Lou Porta, Senior Division Head Coach, the team members also displayed their brand of magic during the season. He said the start of the season was very disappointing, but they fought hard, ignored all the talk around them and focused on getting better.

“Where you end up says a lot more about you than where started, so this team exemplifies that,” Porta said. “In the end, they proved that the only opinions that really matter are the ones from people in the program. I’m so proud of these young men. They always gave full out efforts on the field and the end of the day. The results proved they’re Patriot Champions!”