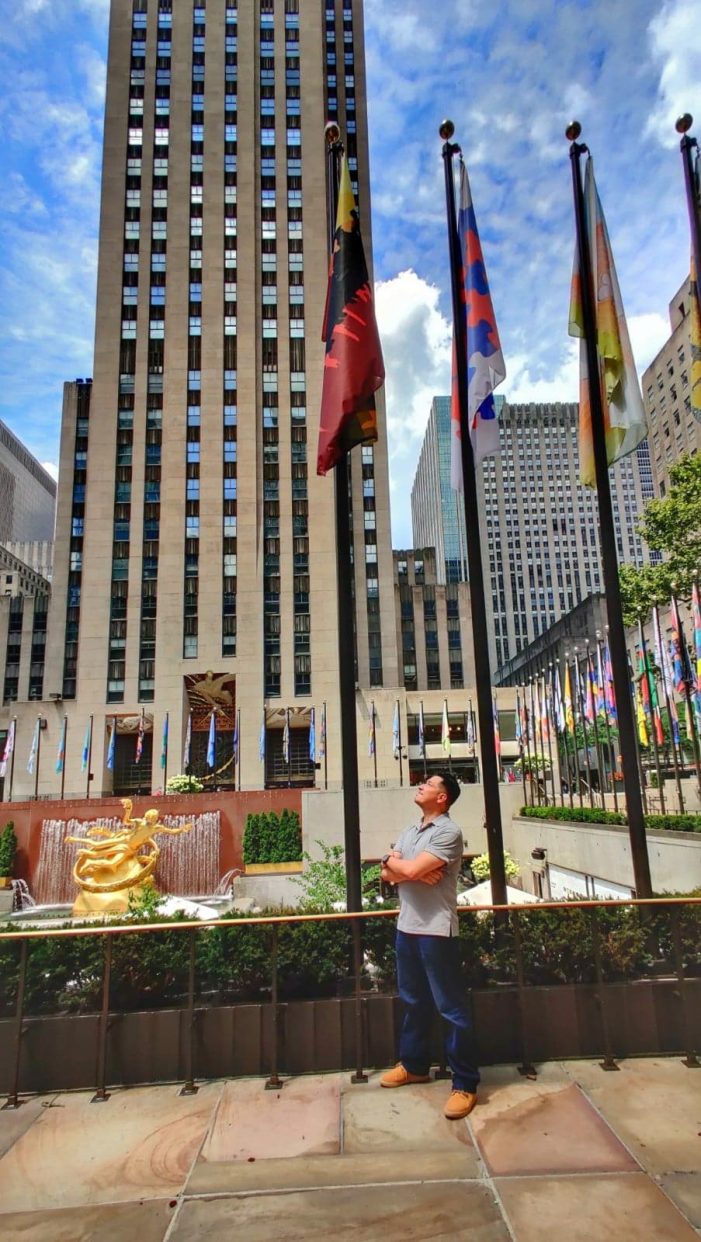 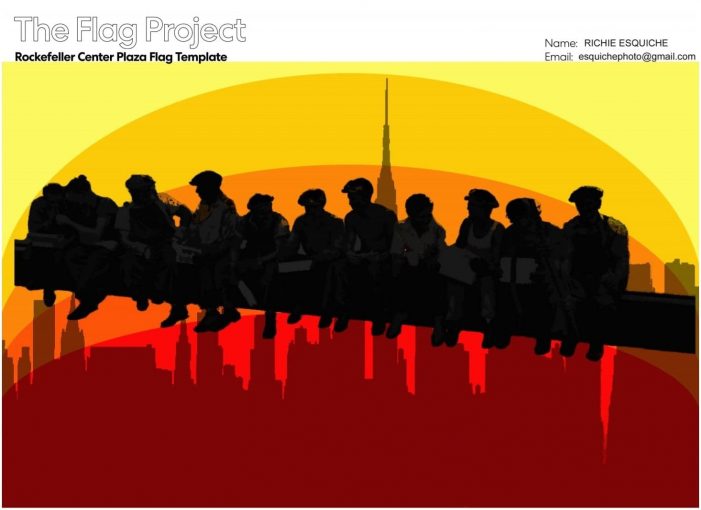 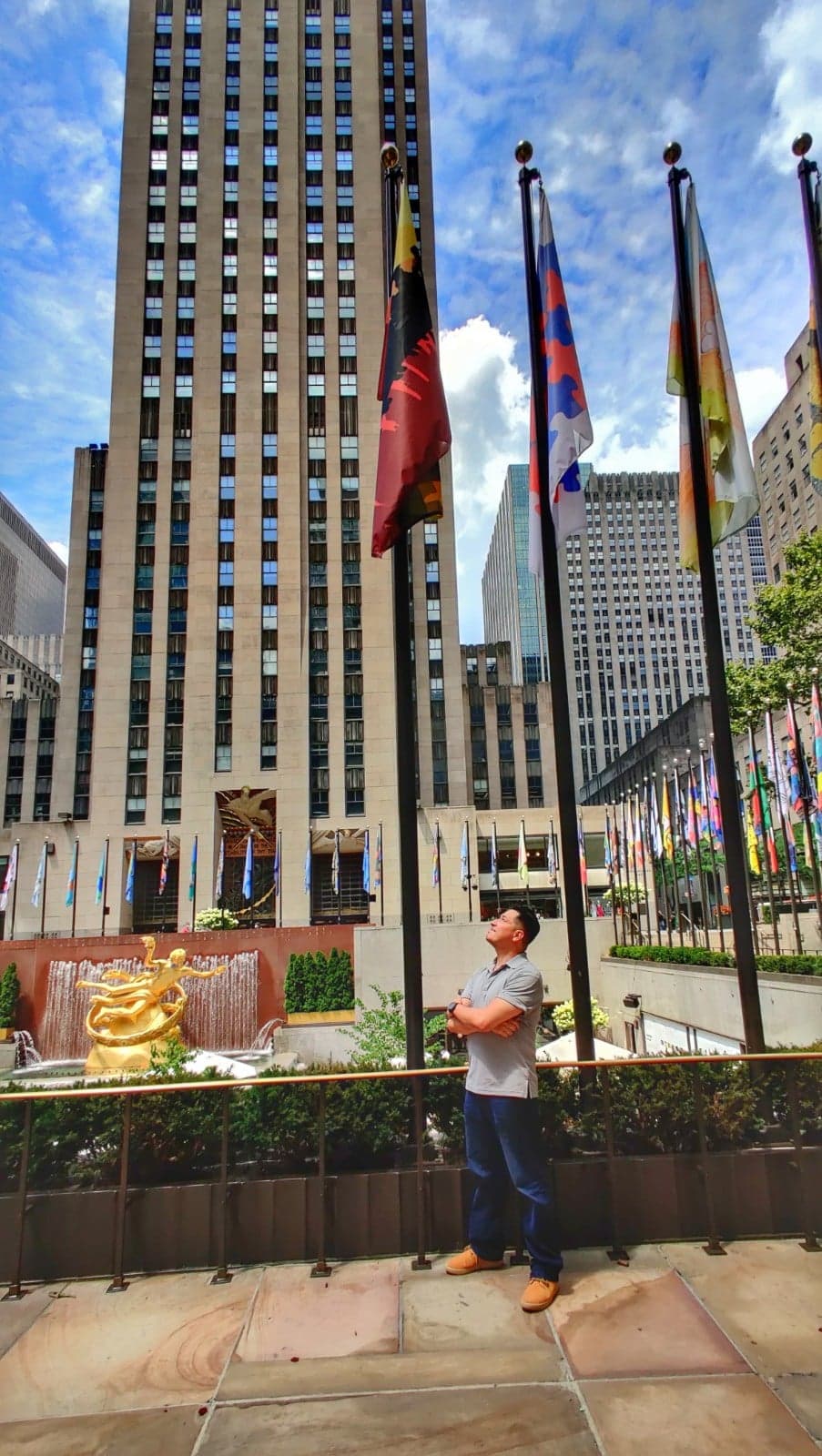 In the Rockefeller Center skating rink area, he and other artists from around the world had the opportunity from Aug. 1 to Aug. 23 to have their latest works, decorative flags honoring New York City unity, flown as part of “Flag Project: Celebrating New York.”

“It’s an 8’ x 5’ flag,” Esquiche says. “I was driving to work, and I heard on 1010 WINS about a flag contest and call for artists, and something about a tribute to New York.”

That night at work, Esquiche sketched on a napkin. He wanted to incorporate the cityscape first, and wanted to make it simple, so it could be seen from far away. “Simple but functional,” he says. “Form and function working together.”

When he was a student at Rutgers University, Esquiche often traveled into Manhattan and fell in love with it. His flag design shows it. On the Rockefeller Center Flag Project website, he describes his flag, which is based on the iconic 1932 photo, ‘Lunch atop a Skyscraper’: “Peruvian-born, Jersey-raised artist. My flag design is a tribute to the dawn of the industrial era; fueled by the labor of many, resulting in the metropolis that is the NYC we love.”

On the flag, eleven silhouetted workers sit perilously along an extended steel beam, the New York City skyline in the background, the sky both yellow and orange, mimicking colors of the sun, dawn or dusk. “I like the silhouette; it makes them anonymous, but still iconic,” Esquiche says. Coincidentally, the men in the photo were at that time working on Rockefeller Plaza. “Back then,” Esquiche adds, “the millionaires funded it, the architects designed it, but the laborers were the ones that got it done.”

Esquiche, a former Prospect Park Councilman and Town Council President who designed his flag entry on Photoshop, discovered his passion for art early in life, while in kindergarten. “I still remember,” he says with a laugh. “They gave everybody a sheet of paper and watercolors. They gave everybody a brush, and in the center, they had different palettes of different colors, and you pretty much could create anything. I just decided to do a simple smiley face, just very simple, and she (the teacher) liked it. She was like, ‘Wow! Very good work, Richie!’ And I was like, ‘Wow! A grown-up said that.’”

Esquiche while in Prospect Park did posters for festivals and events in town. His work of Peruvian Andean Art has been displayed at the Paterson Art Museum, and his photography work has appeared at The Art Factory in Paterson. He especially enjoys doing portraits, and one is a favorite. A friend asked him to do a portrait for her dying dad, who was almost 90. The portrait was of when he married his wife when they were young. “Later on, she told me when he saw it, he cried,” Esquiche says, humbly. The portrait is now displayed in the dining room of the family’s home.

Esquiche’s goal now is to get into filmmaking. “I do photography, I paint, I wood carve, but filmmaking is something I want to do, too. I want something that changes people’s consciences for the better.”