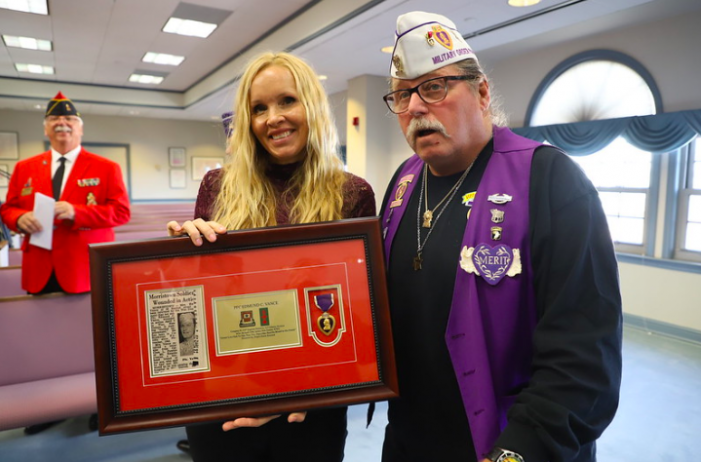 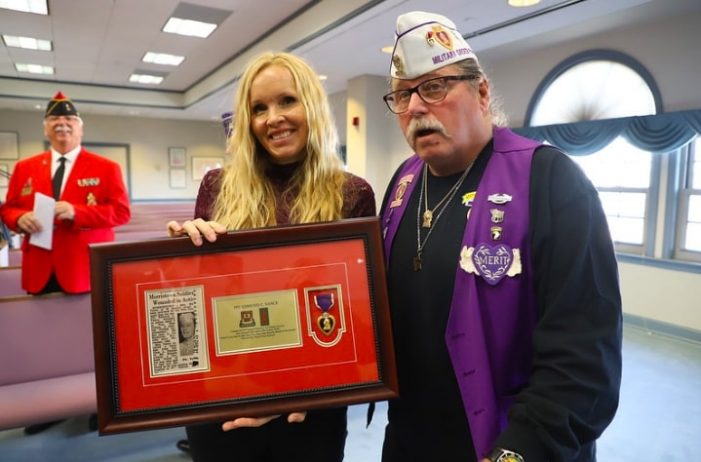 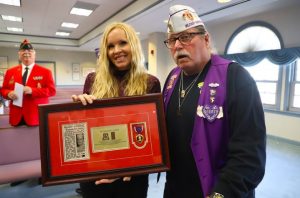 Purple Hearts Reunited delivered the long-lost Purple Heart of a WWII Morris County soldier to the American Legion Post 59 of Morristown today in a special ceremony hosted by the Morris County Board of County Commissioners in Morristown.

“Thank you for letting us bring Corporal Vance home to you,” said Erin Faith Allen, Operations Director of Purple Hearts Reunited, a non-profit organization created by a Purple Heart recipient wounded in Afghanistan to return lost or stolen medals of valor.

Cpl. Edmund C. Vance, a Morristown native born Aug. 14, 1920, was a private serving in Company B of the 114th Engineer Battalion when he was wounded in action in Saidor, New Guinea, on April 6, 1944. He had been serving for two years in the South Pacific, and the medal was delivered to his mother, Emma, at his home on Market Street in Morristown.

Vance returned to Morristown, where he continued to live until his death on Feb. 18, 1985. It remains unclear how Purple Heart was misplaced or lost.

“We rescued this medal when it was being sold on-line. It was from a collector. That is not always the case when we find these medals, but it does happen,” said Ms. Allen, noting the organization finds and returns many different types of medals of valor.

Vance’s medal was presented to the leadership of the American Legion Post 59 of Morristown because no known relatives of the corporal could be found.

“A lot of times when these items are returned to families, the families tell us that it feels their loved one is coming into the room and they get to feel that connection in a really personal way. And this is why we keep doing our work, and when we cannot find the families, we seek a home of honor,” Ms. Allen explained.

Joining the ceremony were Commissioner Director Stephen H. Shaw and Commissioner John Krickus, a U.S. Marine veteran, who cited the inscription on the The Tomb of the Unknown Revolutionary War Soldier.

“Freedom is a light for which men have died in the darkness,” said Krickus. “Cpl. Vance, his Purple Heart, his sacrifice on his part and his comrades in arms will not fade, will not disappear into the darkness.”

Director Shaw noted the return of the Vance medal coincided with a project undertaken by the Morris County Office of Planning and Preservation this past summer in recognition of National Purple Heart Day on Aug. 7.

“Morris County has a rich and storied history of Purple Heart honorees and our historians have joined the mission of the National Purple Heart Hall of Honor in New Windsor, N.Y. to collect, preserve and share the stories of all Purple Heart recipients,” Shaw explained. “We have developed a database and counted about 350 so far in Morris County. However, we know this must be only a fraction of those honored. Cpl. Vance’s story is being added to that list today, thanks to the Purple Hearts Reunited.”

Purple Hearts Reunited, in operation for about 10 years, has recovered about 1,050 medals of valor, including Bronze Stars, and has returned about 800 to families or other “homes of honor,” such as the American Legion.

In the final days of the American Revolution, on Aug. 7, 1782, General George Washington established the Badge of Military Merit to, as his general orders stated, “cherish virtuous ambition in his soldiers.” It was the birth of what we now call the Purple Heart, presented to military personnel wounded in the line of duty.

Niel Van Ess, former National Commander of the Military Order of the Purple Heart, cited Morris County’s and Morristown’s connection to that history in his remarks at the ceremony.

“This is Washington’s Headquarters, the home of the Revolution,” said Van Ess. “You’re honoring and bringing back home not only Cpl. Vance, but you are honoring the mission of what service and the cost of freedom truly, really is. … This is the legacy of what we’ve all been through going back to George Washington.”

Anyone may enroll a Purple Heart recipient to the national database, but documentation is required. Go to https://www.thepurpleheart.com/.

Please contact Jan Williams if you can add to Morris County’s accounting of its Purple Heart recipients by emailing her at jwilliams@co.morris.nj.us.